Connacht will look to break losing run against Glasgow 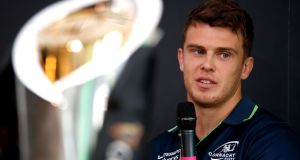 New coach Andy Friend will be hoping to halt a streak that Glasgow started two years ago. In 2016-’17 and 2017-’18 the Scottish side drew Connacht first match in Galway and have won each time.

A glance at the Glasgow side will arm the Australian with sure fire certainty that Scottish intentions this year will be no different.

Just what real changes the former Australian 7s coach will make remains a huge point of interest and with pre-season wins over Brive, Wasps and Bristol there is optimism in Galway.

Friend has spoken about fitter, faster and leaner athletes, which would imply a game played at a higher tempo, an attractive proposition if he can get that right.

He has promised new elements to the Connacht game around the breakdown and restarts, where the 7s play book has been borrowed.

“We’re at the start line in pretty good shape but it’s what we do from here that’s important”, said Friend.

All in all it’s an exciting prospect for the province, who face a daunting opening three matches. Scarlets and Leinster are also in the opening salvo of matches.