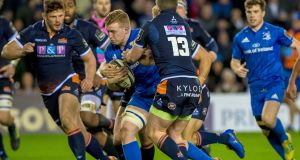 Leinster’s Dan Leavy is tackled by James Johnstone of Edinburgh in their Guinness Pro14 match at BT Murrayfield on Friday. Photograph: Craig Watson/Inpho

Edinburgh moved up the table in Conference B of the Guinness Pro14 after achieving a bonus point win over a less than full-strength Leinster side at BT Murrayfield on Friday night, giving the Scottish capital side a confidence lift ahead of their European quarter final tie with Munster next Saturday.

This was never going to be much of a contest given the absence of so many star players in the Leinster side. And, in the event, it proved to be so despite the Dubliners taking an early lead. But in the end Edinburgh’s forwards produced a power-play performance to muscle their way to an eventually comfortable if hardly pretty win.

Leinster, however, showed their willingness to battle by putting early pressure on Edinburgh with clever inter-passing among the outside backs that ended with a five-metre scrum. The visitors then turned the screw in the set-piece to win a penalty, leaving Ciaran Frawley with a simple three-pointer.

Edinburgh were put further on the back foot after losing Fraser McKenzie to the sin bin following the secondrow’s tip tackle on Noel Reid that forced the centre to leave the field with a head injury.

Leinster soon made their advantage tell when, from a line-out in the corner, the forward pack drove the maul for Sean Cronin to score a trademark try, giving the visitors an 8-0 lead.

Edinburgh tried to reply in kind but failed to hold onto the ball in a driving maul. But, from a penalty award, Edinburgh kicked to the corner only to win another penalty at the ensuing line-out maul. This time Edinburgh, albeit having to be patient through the phases, made their effort count as prop WP Nel finally forced his way over, Jaco van der Walt adding the extras.

Leinster quickly hit back with a second penalty goal by Frawley, but the visitors were soon on the defensive when Edinburgh’s scrum showed their power, eventually resulting in a penalty try for the home side and a 14-11 interval advantage.

Early in the second half Leinster openside Dan Leavy was sent to the sin bin for malpractice in the contact area, and immediately Edinburgh took advantage, using their superior numbers to drive a line-out, ending with a try for hooker Ross Ford and the conversion from Van der Walt.

Leinster then felt the force of the Edinburgh forward pack, who forced a clutch of penalties from their set-piece play and their work at the breakdown. The visitors’ defence was tested to the limit and finally cracked when Bill Mata crashed over for Edinburgh’s bonus-point try, converted by replacement outhalf Simon Hickey.

The visitors came close to salvaging some pride at the death when, after multi-phase play, a bundle of bodies piled over; however, after consultation with the TMO referee, Ben Whitehouse ruled that no try had been scored, leaving Edinburgh clear and relieved winners.