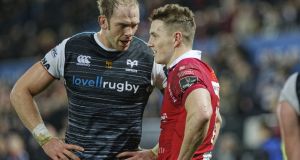 There had been speculation that Ospreys and Scarlets were set to merge together. Photo: Getty Images

Welsh rugby will continue to be represented by the same four regions for the 2020-21 season after the Professional Rugby Board ruled out a merger.

The announcement means the Ospreys and Scarlets will not join forces and also puts the proposal to establish a team in north Wales on indefinite hold.

The PRB, which runs the Welsh professional game, declared it is “united in its pursuit of what is best” without outlining plans beyond next season.

The Scarlets and Ospreys fiercely opposed a deeply unpopular merger as part of so-called Project Reset.

Under that blueprint the combined region in the west of the country, Cardiff Blues, the Dragons and a re-established side in north Wales would comprise the four professional teams.

It was set to be Welsh rugby’s biggest domestic shake-up since the inception of regional sides 16 years ago, but it faced immediate hostility.

At a PRB meeting this week, the merger was taken off the table despite its previous support for the idea.

“It’s hoped the emotion generated by the exploration of merger options can now be translated into support for the professional Welsh teams, helping create a sustainable future for the game in Wales,” a PRB statement read.

“As all options are explored, the PRB will ramp up consultation with stakeholders, including, but not limited to players, staff, fans, clubs, government, broadcasters and partners.”

The news enables the regions to resume contract negotiations with players and comes the day after Wales’ Grand Slam-winning fly-half Gareth Anscombe called on the power-brokers to sort out the domestic mess.

Asked if the uncertainty had made him think about leaving for an English club, Anscombe said: “I think it has made all the boys think about that, to be honest.”

Despite the turmoil that head coach Warren Gatland admitted was a distraction to his players, Wales were able to complete the Grand Slam.