St Michael’s remain favourites having overcome both Blackrock and Belvedere 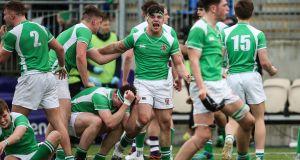 Whatever transpires in Sunday’s Leinster Schools Senior Cup final won’t tarnish the achievement of this Gonzaga College team, the first in the school’s history to reach the blue riband match in the tournament.

It’s not something Declan Fassbender’s squad will dwell on in the short term, nor should they, as there is a match to be won. St Michael’s College are strong favourites, having accounted for last year’s winners, Blackrock College and the beaten finalists, Belvedere College. They are backboned by the players that won a JCT title in 2017.

Gonzaga can dare to dream though, both by virtue of an accomplished playing group – they won the Leinster League title earlier in the season – and the fact that history has occasionally been kind to the underdogs.

Cistercian College, Roscrea (2015) were the last school outside the “big six” to win the Senior Cup, while DLS Churchtown (1983 and 1985) and CBC Monkstown (1976) managed to break that particular hegemony.

Gonzaga’s route to the final has been underpinned by a resilience that has seen them win two very tight contests against Castleknock and Clongowes, fostering a belief forged in high-pressure end games. A key will be to ensure they’re in the contest as the clock ticks towards the 70th minute.

The first challenge is a mental one and central to that is starting the game well. They will look to the leaders in their team to set the tone, like excellent captain and number eight, Jack Barry, the equally accomplished scrumhalf Jack Connolly, outhalf Harry Colbert, loosehead prop Henry Godson (who scored a hat-trick of tries in the semi-final) and secondrow Jack Coolican.

The relatively small playing numbers in comparison to many other schools in the tournament has seen Gonzaga draw from other sporting parishes.

Dublin minor footballer and fullback Conor Hennessy and centre Karl Morgan, who played for Dublin hurlers and footballers at Under-16 level, only joined the SCT squad in Gonzaga last October while flanker Colm Kirby-O’Briain has also played underage county football and hurling for Dublin. All three are members of the Clanna Gael Fontenoy club in Ringsend.

A snapshot of St Michael’s lavish contribution to the Leinster and Ireland rugby teams in recent years can be gleaned from their honours board. Luke McGrath (2011), Dan Leavy (2012), Ross Molony (2013) and James Ryan (2015) have all captained the SCT with Leavy leading them to one of the school’s two senior titles.

The other triumph came under the leadership of Conor Cleary in 2007. St Michael’s head coach Emmet MacMahon, now a teacher in the school, captained the senior team in 2009 and 2010. He presides over a young team – there are eight fifth years and one fourth year in the starting side – festooned with talent and led by their excellent openside flanker Mark Hernan.

St Michael’s too demonstrated plenty of character in edging past Blackrock and then Belvedere, the latter by a single point, and in those games chose to play a narrower game than they had for most of the season. It’ll be interesting to see if they’ll be similarly constrained in their approach at the RDS.

When the finalists met shortly before the start of the cup, St Michael’s had a couple of scores to spare in a keenly contested game.

They’ll start as favourites and justifiably so but the hope is that both teams play close to their best, producing a contest to savour; after that no one can quibble, whatever the result.