Matt Williams: Ireland need to win at all costs 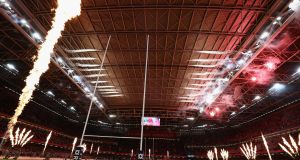 The Millennium Stadium is a daunting venue for any visiting team. Photograph: David Rogers/Getty Images

Some days are defining ones in your life as an athlete. For the Irish players, today is such a day.

For Ireland it is black or white. Win and doors will be opened. Lose and they will be closed. It is Sydney or the bush.

Success or failure will pivot upon Irish belief. Belief in their own talent, their fellow players, their coaches and the process of how it all combines for them to perform.

For Ireland, this match is like taking a journey on the Metro in Paris during the 1980s. You’d push the button over the name of the station you were travelling to and the entire journey, your future path, would light up, guiding you towards your destination. Press the wrong button and you would get horribly lost.

If Ireland can seize this day of golden opportunity, a pathway through to the World Cup will illuminate before their eyes. A once-in-a-generation chance to create energy and momentum towards success in Japan.

Like most great opportunities in life, there are massive difficulties to overcome.

The Millennium Stadium is a daunting venue for any visiting team. It is a cauldron of joy, pride and positivity around all things Welsh. The 60,000 scarlet-clad supporters from the Land of Song will belt out beautifully harmonised hymns at such an unbelievable volume that communication between players is almost impossible. You literally cannot hear you team-mates speak. Weaker minds can suffer sensory shut down under these conditions.

A champion’s mental strength is required to block out the staggering wall of sound inspiring the Welsh to play for causes greater than themselves.

History will have to be made. That’s the measure of the distance this team must journey to win in Cardiff and on to the World Cup.

This Welsh side have been defending with pride and aggression. While the Scots were the architects of their own misfortune, every man on the Welsh team defended with a will that refused to yield. Against Scotland the Welsh made try-saving tackles again and again. Each tackle an inspiration to their team-mates. The Welsh body language said: “Not on my shift.”

This is a potent quality in any defence. While this is not the most talented Welsh team of all time, it is a team with a deep bond and fully united behind Warren Gatland, in his last game in Wales, and their captain Alun Wyn Jones.

Five games out from the World Cup and following a positive performance against France, this is an opportunity, not for redemption, but for real progress. This is the chance for the Ireland players to make a statement, not only to the world, but most importantly to themselves. For success in November, these players will have to grow to a level of performance that they have never been at before. Winning a World Cup is not easy. If it was easy everyone would do it.

New Zealand, South Africa and even Australia are giants at World Cups. It is in their collective DNA to perform and win the Webb Ellis Trophy, which they have all done at least once.

Last year’s Grand Slam is in the history books. It is the future that must be at the forefront of Irish minds.

Today in Cardiff Ireland will be well and truly outside their comfort zone – just like they will be in big games in Japan. That’s a good thing because world champions perform at their best while under pressure. They are “comfortable being uncomfortable”.

If Ireland can bring extreme aggression to every scrum, lineout and breakdown, with a fighting mass of green enthusiasm, they can overcome every piece of Warrenball that is played.

One tactical essential for an Ireland victory is the continuation of the excellent kicking strategies used against France. They must kick with care and variety to minimise the influence of the world class Welsh fullback Liam Williams.

A failure to nullify Williams, or a lack of supreme aggression, will result in defeat. The ramifications of defeat for Ireland are vast.

If you can’t beat Wales away and have a 3-2 Six Nations, how can you realistically hope to beat South Africa, Australia, Argentina or New Zealand and win the World Cup. To even consider defeat is too heartbreaking to contemplate.

I’d bet that Ireland are thinking exactly that. The outcomes of a defeat are so calamitous, the dream of an excellent Irish performance at the World Cup so powerful that another career high performance can be delivered from every member of the Ireland team.

Win and Ireland can truly believe the World Cup is within their grasp.

Whatever the price is for victory, Ireland must pay it. Whatever it takes, Ireland have to win.