Carty, Marmion and Dillane all back in Connacht squad 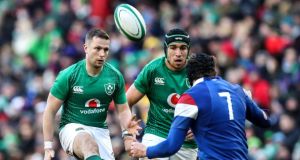 Connacht welcome back a trio of Ireland internationals ahead of Friday evening’s crunch Pro14 meeting with Benetton.

Having won his third cap against Wales, outhalf Jack Carty, alongside scrumhalf Kieran Marmion and lock Ultan Dillane were back training with Andy Friend’s side yesterday, but Bundee Aki and Quinn Roux remain unavailable, having played “a fair bit of rugby”.

Despite the disappointing finish to Ireland’s Six Nations, Friend says his handful of internationals, in addition to earlier squad members, centre Tom Farrell and scrumhalf Caolan Blade, have been rewarded with recognition for their hard work.

“It’s a reward for those men who have been working really hard and been performing. It’s good for the squad to see it and for the individuals to get that, and for other players who may be third or fourth in their province, and thinking maybe if I get to Connacht, there’s a chance if I start playing rugby, I will get seen by national selectors and end up in the national squad. It bodes really well for Connacht.

“If you have a losing Connacht, you are not seeing those blocks there. We have had good performances on the field this year, and out of that the individuals, as well as the team, is getting recognition.”

Friend was impressed with his players’ composure under pressure at the Principality Stadium in Cardiff.

“They did well. They really picked up the pace of the game. I just enjoyed their calmness – Jack Carty, third test, well behind on the scoreboard, but he just got in and did his stuff and created a few opportunities.

“Kieran Marmion came on and he was very good too. Quinn was quality, so I was really pleased for those three boys and proud of the way they came on, but it was probably a game Ireland will want to put an end to quickly and move on.”

Friend expects some of that international experience will be needed to get Connacht over the line against a Benetton side in flying form this season.

No longer holding up the the table, Benetton are second in Conference B behind runaway leaders Leinster and, under coach Kieran Crowley, the Italian side is enjoying its most successful season.

But with games against Leinster and Munster to follow, they will be targeting a win in Galway.

“They have been unbelievable, very impressive in the way they put some sides away this year. The style they play, it’s very physical, and very disciplined, so it’s a huge test for us.

“They had 10 players in the Italian side at the weekend, so there’s a lot of depth. They’ve got the physicality up front and also the skills – wingers scoring tries, a kicking game, nice off-loads- there is a lot to their game.

Another “must-win” game for Connacht, Friend says with just four games remaining, “that is where we are at”.

“We are looking too much beyond each week. We know every game is a must-win so we are not going to say it. We know what we have to do, and if we keep winning, we remain in control of our destiny, so this Friday, it’s Treviso. Get the win, and if we do, it keeps us in the position we want to be in.”

In producing a 45-6 victory over Ospreys in their last outing - their biggest win this season - they did so with centre Kyle Godwin in the crucial outhalf position. And he is likely to see action there again with Conor Fitzgerald still sidelined with a back injury and David Horwitz requiring a surgical procedure to clear out his knee.

“We are skinny in that position, but Kyle did a great job and is more than likely to get a chance this weekend. They [Jack Carty and Kieran Marmion] had a big weekend and our main training session was Monday, so we had them available Tuesday for the first time, so yeah, we will see how it goes there.”

Lock Gavin Thornbury and Niyi Adeolokun have returned to full training, but Cillian Gallagher is the latest injury victim, having taken a head knock in Boston with the Connacht Eagles.