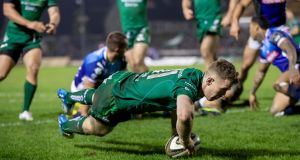 Connacht’s survived a tough cross-conference challenge from Benetton Treviso in the Sportsground to maintain their push for the knock-out stages of the Pro14 with a bonus point success.

But in this bruising encounter, Connacht ultimately edged the contest in the final quarter, denying a teak-tough Treviso team their ninth win on the trot.

The bonus point score came on the stroke of time as outhalf Jack Carty made a heroic return to his Sportsground stomping ground with a delightful chip and catch from inside his own half, and then crowned the move after a succession of quick hands, and a series of phases deep in the Benetton 22, when he was on hand to finish off the breakout he started himself to secure a fourth try just shy of full time.

It ensured Connacht are now well positioned in Conference A, although it looked an unlikely scenario for long periods of this contest.

A fiery start from the visitors put Connacht’s defence under early pressure. Their ability to retain possession and go through the phases kept Andy Friend’s men under pressure, but a knock-on eventually gave the home side their first sustained passage of play. Breaking out of their own 22, Tiernan OHalloran directed the back three operations as they went from end to end and, although a planned move broke down, when Matt Healy was unable to secure possession in the face of a aggressive defence, Connacht were up and running.

The scrum proved something of a contentious area, and Benetton prevailed until the home side were able to take advantage when the visitors were caught offside from an attempted clearance from scrumhalf, South African Dewalt Duvenage. Flanker Eoin McKeoin secured the lineout from the penaty to touch, and Connacht produced a sweeping move from left to right. Eventually from the breakdown, Caolan Blade picked up from the base, and weaved his way through untouched to score the opening try, with Kyle Godwin converting.

The helter skelter nature of this contest continued with both defences kept on their toes. However, the home back three of O’Halloran Matt Healy, and Darragh Leader were the springboard for Connacht’s best attacks. Healy looked to have secured a second try before being caught in possession, but eventually he secured a touchdown, taking advantage when the ball squirted from a ruck over the visitors’ line. Godwin added the extras for a 14-0 lead after 29 minutes.

Connacht, however, suffered a sucker punch when Benetton grabbed a try two minutes from half-time. The well schooled Italians had been pummelling the Connacht line from a five metre scrum, and while Connacht skipper and man of the match Jarrad Butler may feel aggrieved for being penalised at the breakdown, replacement outhalf Antonio Rizzi seized the moment to break the defence to score from five metres and duly added the extras himself to reduce the arrears to 14-7 at the interval.

The second half continued in a similar vein with both sides struggling to penetrate stout defences until a poor kick from Godwin gave Bentton the opportunity to break out of defence. Big number eight Toa Halafifi found some space up the right wing, Rizzi payed a supporting role and scrumhalf Duvenage finished off the stunning counterattack from deep.

Connacht quickly re-established territorial control again, coming close to scoring a third try, but Leader was just shy of securing Jack Carty’s grubber kick. Carty opted to kick a penalty from just inside his own half which sailed through the uprights to give the home side back a slender lead.

No one worked harder than Ultan Dillane in the pack, which put the Benetton back on its heels soon after. From one of the best lineout surges of the night after Gavin Thornbury’s catch, Conanacht spread the ball right then left with Carty, for the second week in the row after his Cardiff assist for Jordan Larmour, providing the scoring pass, this time to left wing Healy out wide who bagged the third try, giving Connacht a 22-14 lead.

And the replacement number 10 again stamped his class on the proceedings with his his dramatic late contribution when both creating and finishing a superb try.