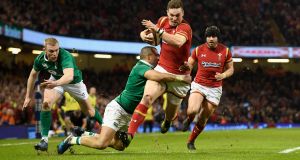 George North of Wales scores the first try during the Six Nations match between Wales and Ireland at the Principality Stadium, Cardiff in March 2017. Photograph: Stu Forster/Getty Images

There is a bus story from 2005 that Mike Ruddock likes to tell and retell, as is his right forever more.

“I remember talking to Reggie Corrigan about the game,” starts the current Lansdowne head coach, then of Wales. “‘Look, Mike, we came out of our team hotel ready to spoil the party. Eddie O’Sullivan had us very focused, we trained well all that week, but what should have been a 10-minute drive to the ground took 30 minutes because the Welsh fans had invaded the streets. They were banging on the windows, banging on the doors.’

“He honestly said, ‘By the time we got off the bus none of really thought we would win the game because of the incredible scenes. It felt like we were taking on the whole nation.”

Cardiff. Overshadowing the old Arms Park, once the Millennium, now called the Principality, positioned as this great, looming hovercraft above the river Taff (imagine plonking a massive stadium in St Stephen’s Green), it has been the scene of Irish dreams and nightmares.

These frenetic gatherings became strapped-in rollercoaster rides that referee Wayne Barnes influenced perhaps more than he should, but, equally, they revealed Irish shortcomings and stubbornness in equal measure.

“They are different teams, different times and in both of them they were incredibly fine margins,” said Schmidt on Thursday. “We played relatively well both times, I felt. We certainly had more line breaks, more opportunities, but they are very hard to capitalise on.

“Wales are incredibly good at slowing your ball down when you get into their danger zone. You saw it last week with Scotland – it is difficult to score against them, particularly at home. You saw last season we scored five tries against them but they do grow another leg in the Principality Stadium.”

Especially when the roof is slammed shut. Or not, as they showed England.

“Look at how fine the margins were [in 2017],” Schmidt continued. “We were down by six points and Robbie Henshaw joins the lineout maul in front of the ball, and Wayne Barnes correctly penalises him – although I haven’t seen a call made like that since – and suddenly what could have been a one-point lead with pressure going back on them remained a six-point lead with them clearing their lines.

“It’s about getting as many of those fine margins to fall in your favour. How do you manage to do that? You try to be as accurate as you can be.

“We are going there to play because you can’t afford to go into your shell. I think they will have a similar attitude to a degree. They will certainly play a territorial game. We will have to work our way out of our half more often than not.”

This is the problem. Ireland’s natural approach plays directly into Welsh hands. CJ Stander, Seán O’Brien and others will probe for the tiniest gap; they will carry until their legs fail them.

This fixture in 2017 rammed home the value of Johnny Sexton and Conor Murray (because Ireland conceded most of their points when Sexton was either completing a head injury assessment or sitting in the sin bin, while Murray was also forced off with an arm injury). It’s where, four years ago, Paul O’Connell’s Grand Slam mission failed in heated agony at the whims of Barnes.

It’s where the Welsh will tackle to a standstill and then get up and tackle some more.

“The line speed is still there from Wales,” said O’Connell in admiration, sitting on his BBC perch in 2017, as 80 minutes ticked red with Ireland jaded and well beaten 22-9. “It’s absolutely incredible to see the likes of [Justin] Tipuric get off the line with absolute intensity after the shift he has put in.”

Everyone expects the “incredible” in this fixture.

Wales and their adoring public expect to win this fixture every time.

Here’s why: Schmidt has no hoodoo over them. Not like the spells cast over All Blacks, Springboks, Wallabies, Scotland and almost every other team he turns the magnifying glass upon.

Not the Welsh, not under Warren Gatland or Rob Howley or Shaun Edwards’ vicious defensive structure. The Schmidt-versus-Wales record remains deadlocked due to a draw at the Aviva stadium in between the Cardiff defeats, and last year Jacob Stockdale’s intercept finally calmed the storm.

This is the tie-breaker. Ireland have never lost their last Six Nations game under Schmidt but they haven’t beaten Wales in Cardiff either.

The game will almost certainly run along predictable lines, the ball in play for a ridiculous amount of time as Ireland rack up 20, 30 phases in the face of Welsh contentment to tip the 300-tackle mark if needs be.

There was a last-gasp scrum penalty for Wales, on their five-yard line, that still burns Irish eyes

In 2015 Ireland carried relentlessly but Wales held firm. Over 250 times.

Irish and Welsh men took to the skies on four occasions in the first half and each time the ball returned to earth in a red shirt. Leigh Halfpenny leapt over Conor Murray, Jamie Roberts beat Rob Kearney.

There was a last-gasp scrum penalty for Wales, on their five-yard line, that still burns Irish eyes. O’Connell and Schmidt were subsequently asked if they knew why it was given.

Not another word from either man.

With it went the Slam – the championship was won in Murrayfield a week later – but O’Connell’s career passed into shadow soon after. In fact, it ended in agony on this very turf.

“At 14-6 the Grand Slam was ours but Stephen Jones kept them afloat with a penalty here, another penalty there, until his late drop goal put them ahead with moments to play.”

The Welsh will always be this way in Cardiff.

“Something magical occurs when the red jersey goes on in the Six Nations, ” D’Arcy wrote, “especially against England or Ireland. They rise to the occasion, surge with belief.”

“It was like a snowball rolling down the hill,” says Ruddock senior.

“The defining moment was the charge down on Ronan O’Gara. Credit must go to our defence coach Clive Griffith. Part of his plan was to get off the line and pressure O’Gara really hard. He showed a clip of Ronan on the Lions tour scrapping with the Australian boy. What’s his name again?”

That was no scrap. That was Duncan McRae landing at least 11 clean punches into the Cork man’s face.

“Yeah, Clive showed that clip. ‘Look lads, if we can get into Rog early we can really put him off his game.’ It was not to go out and beat him up or adopt the same level of brutality as McRae but, certainly, we wanted to get at him a bit.”

It’s always been a fantastic stadium. The Welsh hymns do lift the guys, they always have

Some things never change. At least Johnny Sexton is a larger specimen.

On 15 minutes the modern mobile prop Gethin Jenkins sprinted off the line to block O’Gara’s spiral before toe-poking the ball 40 metres for a glorious try. The stadium shook to its bones, with the carnival atmosphere refusing to relent until daylight the following morning.

“I’m from another generation,” says Ruddock. “We had that in the old Arms Park. As a schoolboy I went to watch the great teams of the 1970s. It was even better back then as we had the vibe of the terraces, we were closer to the pitch. It’s always been a fantastic stadium. The Welsh hymns do lift the guys, they always have.”

Land of My Fathers will rise from the elderly choir as kick-off looms.

Hear O’Connell on comms: “Whenever there is a break in play you look down at the players and wonder how they are going to play another phase, they look so tired, but then the ball comes into play and the Welsh defence just comes to life.”

“We are going there to play because you can’t afford to go into your shell,” Schmidt promised.

Maybe that’s just the way it has to be, but the blueprint to wear down Ireland in a World Cup quarter or semi-final was visible in those 2015 and 2017 games.

We are about to find out.