Joe Tomane, Noel Reid and Ross Byrne all back training this week ahead of Cardiff trip 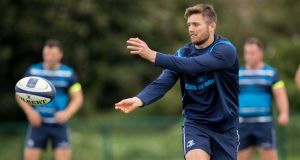 Leinster have been boosted by the return of new signing Joe Tomane in time for next Friday’s Pro14 opener away to Cardiff Blues, and similarly Noel Reid’s return from injury, along with the anticipated availability of Ross Byrne has strengthened the champions’ options for their opening assignment.

Tomane suffered a foot injury in the 42-17 defeat to the Newcastle Falcons in Energia Park last Friday week which has cleared and the Wallabies’ centre is available for selection this week. Reid sustained a quad injury in the win away to Montauban the week previously, and will return to training this week, while Ross Byrne has returned to full training this week after being an unused replacement in the third test against Australia, and could start against the Blues.

Leinster have also been boosted by the return to training this week of Garry Ringrose after his recovery from the foot injury which ruled him out of the third test in Australia.

Pending the return of Johnny Sexton and the other front-liners, another of the young out-halves in the Leinster squad following on from the departure of Joey Carbery, Ciaran Frawley will remain sidelined for another few weeks due to the damaged wrist he suffered against Newcastle.

The recuperating Dan Leavy, Sean O’Brien and Josh van der Flier are, according to Leinster “progressing well”, with the latter to take part in some of their training sessions this week. However, Will Connors damaged his ACL against Newcastle and will be sidelined for “an extended period of time.”