Encouraging start for Zebo and O’Connell in France 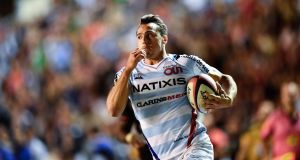 Racing 92’s Argentine wing Juan Imhoff scores a try in the victory over RC Toulon in the French Top 14 game at the Mayol stadium in Toulon. Photograph: Christophe Simon/AFP/Getty

The Irish in Paris were the big winners in France on the opening weekend of the Top 14 with both Simon Zebo and Paul O’Connell enjoying big away wins in their first competitive games.

And Zebo, with his former Munster and Ireland team-mate Donnacha Ryan in the second row, helped fashion a 25-9 win for Racing 92away to Toulon with a solid 80-minute performance at fullback.

“The coaches told me when I came over that they saw me as full-back at the moment but there is such competition for places here that you are just delighted to play anywhere.

“Each game in this competition is like a cup final, Clermont are our first home match and there is just a big game every weekend after that so you have to take your chances,” he said.

Zebo did that on Saturday at Stade Mayol but it was another summer signing who stole the show with Scottish international Finn Russell running in two tries in a four-minute spell on his way to a 20-point haul.

But that bonus point win only claimed fourth spot in the table for Racing after the opening round, with Clermont Auvergne the early pace-setters with a 67-23 hammering of Agen.

Agen have the lowest budget for the 2017-18 season with a spend of €13.8 million, with Jackson’s Perpignan next lowest on €16 million.

O’Connell’s Stade Francais are the top spenders with a budget of €34 million and the difference in class was apparent at Stade Aime Giral on Saturday afternoon as Jackson’s new side were blown away.

They trailed 29-3 at the break before Jackson, who had landed an early penalty, gave the full house in the Catalan city some hope with a 53rd minute try but the Parisians pulled away for a comfortable 31-pt win.

O’Connell, with former Munster scrumhalf Mike Prendergast as backs coach, will get his first taste of a home match at Stade Bouin next Saturday night when Stade Francais entertain Bordeaux-Begles.

Perpignan will travel to Agen next weekend for what already is being regarded as a relegation encounter.

Pau, coached by former Munster assistant Simon Mannix, have a bigger budget than Racing 92 but they went down to a disappointing 41-19 loss away to Bordeaux-Begles, with the hosts scoring 14 points in the closing stages when former Munster lock Dave Foley was in the bin.

Last season’s surprise champions Castres, who Munster will face in the Champions Cup, opened the defence of their crown by repeating their Top 14 final success over Montpellier, winning 25-20 away from home.

Meanwhile, in Pro D2, Stuart Olding’s Brive got their first win of the campaign when they defeated Colomiers 27-17 at home.

Olding, who scored on his competitive debut in the opening round loss away to Bayonne, played 80 minutes at inside centre.