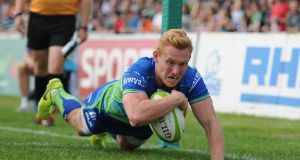 Rory Scholes: makes his first start of the season for Connacht against Dragons at Rodney Parade. Photograph: Tommy Grealy/Inpho

The combatants share a common perspective on this Guinness Pro14 match, indentifying it as a must-win encounter to try and inject some positive momentum. However the Dragons’ need is greater having lost their opening two matches to Leinster and Edinburgh respectively.

Head coach Bernard Jackman, once of Leinster and Connacht, has made three personnel and two positional changes for their second home game of the season.

His Connacht counterpart Kieran Keane makes even more swingeing alterations to the side that racked up a bonus point win against the Southern Kings.  Summer signings, prop Denis Coulson and wing Rory Scholes, make their first starts of the season, so too Quinn Roux, Caolin Blade, Conor Carey and Jake Heenan. Eoghan Masterson returns to the backrow replacing the injured Sean O’Brien.

Former Leinster interpro and schools international secondrow Gavin Thornbury, who spent a year in New Zealand, should get some game time though he starts on the bench.

Connacht assistant coach Nigel Carolan said: “Bernard Jackman is trying to rebuild the Dragons and create a strong identity, much like he did in Grenoble. They will be a tight-knit group and very difficult to play against.

“They have some real firepower with Ashton Hewitt, Zane Kirchner, and the boot of Gavin Henson. It is going to be a very difficult game for us and we have to make sure we build on last week and are more effective than we were against the Kings.”

Injuries have denied Connacht continuity in terms of selection and once again Keane has had to shuffle his resources.

Jackman has reached out to the local community since his arrival and the response has been generally positive but he could dearly do with a victory to reward that support. This represents a very good chance.