Johnny Sexton will captain Leinster for Edinburgh clash on Friday 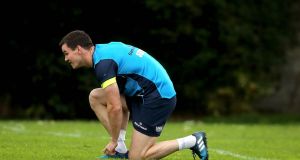 Jonathan Sexton will start for Leinster on Friday at the RDS. Photograph: Ryan Byrne

Ireland and Lions outhalf Johnny Sexton will make his Leinster seasonal debut in the RDS on Friday night against Edinburgh in the Pro 14 league.

Sexton, along with several other Lions players have not figured since the summer tour. He takes his place at 10 as captain of the side and partners scrumhalf Luke McGrath.

There is also a strong possibility that the match could become an historical occasion for Sexton as he is just nine points short of becoming the all-time highest Leinster points’ scorer.

Leinster are hoping to bounce back after a mini tour to South Africa that started and ended badly with defeat to Cheetahs in Bloemfontein. The team faces Munster next week before their first match of this year’s European campaign against Montpellier.

In total four of the Leinster players that toured to New Zealand with the Lions as well as four others, who missed the Cheetahs game through injury or personal reasons are included in the squad.

Joey Carbery is selected at full back for the third game in a row, with Dave Kearney again on the left wing. Fergus McFadden makes his first start of the campaign on the right wing, having recovered from a hamstring injury picked up ahead of the Southern Kings game. Noel Reid and Rory O’Loughlin form an all-St. Michael’s midfield pairing.

In the pack another two Lions line out with props Jack McGrath and Tadhg Furlong also making their seasonal debuts, with hooker Seán Cronin completing the front row.

Scott Fardy and Devin Toner return to the second row, having missed out on South Africa with Rhys Ruddock and Jordi Murphy selected at blindside and openside flankers respectively. Seán O’Brien, the final Lions addition, completes the backrow at number eight.

Liam Toland: Astute kicking game helps England establish a stranglehold 06:30
Ken Early: Guardiola eyeing what could be a last chance for European glory with City 06:00
Galway’s ‘massacre of a beating’ on Tyrone a statement of intent to Dublin 06:00
Magic Wand in the running to conjure Riyadh win 06:00
Six Nations: Pitch-perfect England expose character flaws 06:00
Here is your handy guide to sport on television this week