Tiernan O’Halloran is back as Connacht visit the champions

Kieran Keane: ‘We are going over to beat them obviously. We have put in place a plan’ 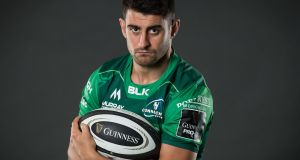 Irish international Tiernan O’Halloran is back in the Connacht XV. Photograph: Inpho

Connacht have been boosted by the return of Tiernan O’Halloran from injury as they travel to Wales to take on champions Scarlets in the Pro14 on Friday night.

Hooker Tom McCartney is set to captain the team as takes his place in the front row alongside Denis Buckley and Conor Carey. In the back-row Jake Heenan and Eoin McKeon come into the side, for their second and first starts of the season respectively.

A fit-again O’Halloran on the wing with Darragh Leader being retained at fullback. After coming off the bench against Cardiff last week, Tom Farrell forms the centre pairing with Bundee Aki. Caolin Blade gets his second start of the season as he forms a halfback partnership with Jack Carty.

“They are very expansive, very well skilled and a well drilled team. We are going over to beat them obviously. We have put in place a plan that we think could trouble them, but they are a quality side and you don’t become champions for nothing.

“Decision-making has really been a focal point for us. We have hard workers, we have good players, and we have structures they are coming to grips with that will create opportunities, which we haven’t been able to exploit yet. So, putting a little bit of polish on the rough diamond is what we are looking to achieve.”