Connacht caught out as Cardiff win at the death

Late converted try costs Connacht a win at the Sportsground 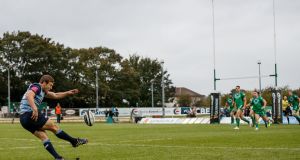 For a second successive week Connacht handed their opponents a first win of the season, this time Cardiff Blues the grateful recipients of a late winning try at the Galway Sportsground.

It seemed harsh for the home side who had done all the work against the wind to take a 15-10 lead, but woeful defence in the last play allowed centre Willis Halaholo to saunter over for his second try to level the match, with replacement Jarrod Evans adding the conversion for the visitors first Pro14 win this season.

Kieran Keane’s side failed to take advantage of the elements in the first half, and despite two clear-cut chances, they opened their account with an 11th minute penalty from Craig Ronaldson.

Connacht’s inability to win clean ball at the breakdown in the face of an aggressive Blues defence hampered their chances to score, and they were not helped when John Muldoon was yellow carded for tackling a Cardiff player without the ball, and minutes later Ultan Dillane conceded a penalty, allowing Steven Shingler to kick for touch within the Connacht 22.

The result was a forward drive with centre Willis Halaholo breaking through the attempted tackle of Rory Scholes to touch down. Shingler added the extras to take a half-time lead.

Cardiff had had Connacht under all sorts of pressure in the second half, but the home side soon stepped up their intensity. A couple of heavy hits from Dillane got the crowd behind them, and after a series of patient attacks replacement Stacey Ili supplied fullback Darragh Leader out wide who crossed in the corner.

Outhalf Andrew Deegan was unable to convert the touchline kick, and three minutes later Cardiff retook the lead with a Shingler penalty when Connacht were once again pinged at the breakdown.

Although were denied a try by the TMO, replacement hooker Shane Delahunt touched down from a forward drive and Leader sent his touchline kick through the posts to take a 15-10 lead with just five minutes remaining.

Still enough time for Cardiff, and with a scrum on their 22, it provided the platform for Halaholo to saunter in when a huge gap developed on the right. Replacement Jarrod Evans add the extras.