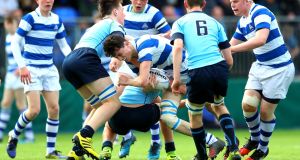 Most injuries in youth rugby occur due to the collision elements of the game, say academics from Newcastle University’s Institute of Health. Photo: Inpho

World Rugby has rejected “extreme and alarmist” claims made in a study that calls on scrums and tackling to be banned at school level, with a number of former international players also speaking out against the proposal.

Allyson Pollock and Graham Kirkwood from the Institute of Health at Newcastle University had urged the government to remove the tackle and other forms of “harmful contact” from school rugby. They argued that removing collision is likely to “reduce and mitigate the risk of injury” and said governments have a duty to “ensure the safety of children”.

But World Rugby, the sport’s governing body, has raised doubts over the data on which Pollock and Kirkwood based their claims, made in the British Medical Journal. “World Rugby and its member unions take player safety very seriously and proactively pursue an evidence-based approach to reduce the risk of injury at all levels,” a spokesman said.

“The continual claims made by Pollock are not based on like-for-like injury statistics and her extreme and alarmist conclusions are simply not supported by the data. It is well documented that, for most sports, injury rates increase with age, but the quoted research mixes 9-12 with 18-20 age groups.”

The Rugby Football Union echoed the views with the new chief executive, Steve Brown, saying: “Ultimately, the values and quality of our sport far outweigh the risks attached to it through some studies. People play our sport because they want to be physically active. They like the values of the sport, its culture and other stuff that goes with it, the connection it gives people.

“I don’t think there was anything new in the report. It was stuff that had been out there previously. It’s serious business and an important report but for us it’s not particularly new. What we are constantly doing is developing how the game is played in schools and rugby clubs for young people and making sure that it is safe, that there is appropriate coaching and that people are aware of what they should and what they shouldn’t be doing at that important development stage.”

Last year, the nation’s most senior medics rejected a call for a ban on tackling in youth rugby. But Pollock, who has been researching the subject and rugby injuries for more than 10 years, and the senior research associate Kirkwood, have reopened the debate.

“We call on the chief medical officers to act on the evidence and advise the UK government to put the interests of the child before those of corporate professional rugby unions and remove harmful contact from the school game,” they wrote.

“Most injures in youth rugby are because of the collision elements of the game, mainly the tackle. In March 2016, scientists and doctors from the Sport Collision Injury Collective called for the tackle and other forms of harmful contact to be removed from school rugby. The data in support of the call is compelling.”

Among the former players to speak out were the World Cup-winning flanker Maggie Alphonsi, who said that the “benefits far outweigh the perceived risks”. Will Carling, the former England captain, suggested “organising children in weight categories, not age” as an alternative – a system used previously in New Zealand.

Peter Robinson, the father of Ben Robinson, who died at 14 from second impact syndrome following a school game, and who has worked to inspire a change in concussion guidelines, added on Twitter: “Banning tackling at schools not the answer. Mismanagement of concussion is the greatest risk in the game.”