Iain Henderson and Jared Payne on the way back for Ulster

Secondrow could feature off the bench against Dragons on Friday night 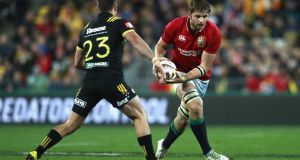 Iain Henderson, seen here in action for the Lions against the Hurricanes, could make his seasonal reappearance off the bench against the Dragons. Photograph: David Rogers/Getty Images.

After a few sobering days with regard to medical bulletins from the province, there was more positive news from the Ulster camp on Tuesday when the province’s Director of Rugby Les Kiss confirmed that two of his British & Irish Lions contingent, Iain Henderson and Jared Payne, are set to return in the next two weeks.

Indeed, Kiss said that Henderson is in line to make his seasonal reappearance off the bench in their Guinness Pro14 game against the Dragons at the Kingspan Stadium on Friday night. Payne, whose injury troubled Lions tour was eventually cut short by headaches, is in line for his return away to Zebre on Saturday week.

“Hendy will be back and come off the bench for us,” said Kiss, who added: “In terms of Jared, from next week he will be available.”

This was welcome news in light of the hamstring tear which Ulster’s third Lion, Rory Best, suffered in training last Thursday and which has sidelined him for four to six weeks.

Of the three overseas’ players who have been sidelined lately, Kiss intimated that Charles Piatau is “probably closer” to a return than his South African back-rowers, Marcell Coetzee, Jean Deysel and Schalke van der Merwe.

‘A bit of clarity’

Kiss said they are “waiting for a bit of clarity on” on Coetzee and Deysel, and added of Coetzee: “It’s the knee so we’re just making sure it’s all in a good place and go through the process when he got fluid in it, it’s just working through and making sure it’s clear on all that. We’re just looking after it and it may be a case this knee flares up every now and then so we’re just keeping an eye on it at this stage. Hopefully if not this week, then next week.”

Van der Merwe is about three weeks away from a return.

Deysel is suffering from what has been described as minor trauma to the eye. “He just got a poke in the eye and it is just managing the bruising on it and you do not want another knock on it and having to manage if further. We will get some more clarity on it this week and see where we are, but touch wood (and Kiss touches the desk in front of him) everything is good there.”

Kiss is of a mind not to play anyone suffering from other minor injuries, with just three games before their opening European Champions Cup game at home to Wasps.

“We might rest a couple of those and move into another space in that area. It is hard when you want to try and give guys a run because you need three deep in each area if you can and give them a run, club rugby is serving well in that area, but we just need to see a couple of guys at that next level. There will be a couple of changes for sure.”

Last Friday’s hard if entertainingly earned 27-20 win over the Scarlets, which ended the champions run of nine successive wins and left Ulster second in Conference B behind Leinster with three wins out of three. Yet Kiss is understandably wary of the Dragons, who arrive in Belfast buoyed by their first win under Bernard Jackman at home to Connacht.

Talk of Jackman juggling his squad for Friday’s game drew a knowing sigh from Kiss. “When you hear it you’ve got to prepare not to be seduced by it. You’ve got to stay on track mentally and focus for what’s important for you. They’ve talked about their ambition and rightly so we won’t take it for granted that’s for sure.

“I think these are dangerous times because if they do make a raft of changes there are guys willing to prove a new coach wrong and prove to him that they should be in that starting position. If he does and they do then we’ve just got to be better than that.

“Our focus is us and the right things about them. It does make it difficult when you think who the player is going to be but we have to be a little bit more generalised about what we have to do rather than concentrate on the individual.”