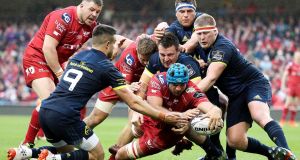 Exiled Irish lock Tadhg Beirne looks all set to join Munster at the end of the season having turned down a new two year contract with last year’s Pro12 champions the Scarlets.

The 25 year-old was an integral part of the Welsh region’s triumph last season, scoring a try in the runaway final victory over Munster in Dublin, and Scarlets head coach Wayne Pivac is desperate to keep him in Wales.

But the former Ireland Under-20 star has been identified by Munster and the IRFU as the long term successor to Donnacha Ryan, who left the Irish province for Racing 92 at the end of last season.

“Tadhg had a standout game for us at the breakdown in Ulster last weekend, but he is one of about 20 players who are coming out of contract at the end of this season,” admitted Pivac.

Irish coach Joe Schmidt is known to be a keen admirer of Beirne, but is unlikely to pick him this season while he is still playing outside of the four provincial teams.