Popular figure served as press officer with Leinster and then Munster 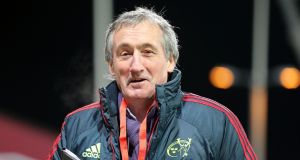 It is with great sadness that Irish rugby has learnt of the passing of Pat Geraghty after illness. For more than two decades, Geraghty was a constant presence and hugely popular figure within playing and media circles as a press officer first with Leinster and then Munster.

From Kildare, Pat joined Munster in 2000 after spending ten years as press officer with Leinster. He was Munster’s media manager until the end of the 2012-13 season, during which time the province won the Heineken Cup in 2006 and 2008, as well as the Celtic League wins of 2003 and ’05, and the Magners League titles of ’09 and ’11.

During that time he also worked with the London 2012 Summer Olympics.

Educated at Clongowes Wood College, in his early days Pat played club rugby with North Kildare Rugby Club and continued his long-standing association with the club by joining them as director of rugby after his time with Munster.

Pat dealt with the ever-increasing media demands placed on Munster, through something of a golden era for the province, in his own distinctive and passionately hands-on way. As in his time with Leinster, he did so without ever taking himself too seriously, and was invariably an outgoing, sociable, sharp-witted, funny and engaging figure. We all had some great times in his company.

Our thoughts are with his wife Kathy, daughters Sarah and Mary-Kate, and all his family and friends at this time.

Funeral arrangements: Reposing at home on Wednesday, from 4pm to 8pm with prayers at 7pm. Funeral mass on Thursday, in St Patrick’s Church, Celbridge, at 11am, followed by burial in Donacomper cemetery. House private on Thursday.