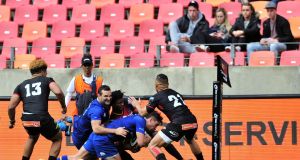 Leinster’s Joey Carbery scores a try against the Southern Kings in front of a few hundred people in the Nelson Mandela Bay Stadium on Saturday. Photograph: Ryan Wilkisky/Inpho

The optics looked appalling and maintained a rather ignominious start to the expanded Guinness Pro14 and the brave new dawn heralded by the arrival of the two South African franchises. By the end of Leinster’s win over the Southern Kings in the Nelson Mandela Bay Stadium in Port Elizabeth it seemed that the cameras had panned onto pretty much everybody among the few hundred scattered around the 48,000 capacity stadium. Anyone who didn’t see themselves on the big screen must have felt left out.

Leinster’s 31-10 win completed a fifth defeat in five games for the two South African sides, in which they had been outscored by 30 tries to eight and 213 to 67 points. The Cheetahs did subsequently beat Zebre 54-39 at home, scoring eight tries, although the five they conceded again highlighted their porous defence.

Coupled with the logistical difficulties which prevented the Leinster squad from travelling en bloc as they’d originally planned, and the visa imbroglio which resulted in Isa Nacewa and Jamison Gibson-Park returning home, it all reflected rather poorly on the competition.

Perhaps these were all the inevitable hiccups of bringing the two South African teams on board and revising the competition’s structure at barely five weeks’ notice. Throw in the embarrassment of the Springboks’ record 57-0 defeat to the All Blacks, and it made for another pretty dismal weekend for South African rugby.

South Africa are a particularly interesting case study at the moment, what with the Springboks also playing Ireland at the Aviva Stadium on November 11th, four days before World Rugby decides between the two countries and France for the right to host the 2023 World Cup.

It’s also worth stressing that the Cheetahs have been competing on two fronts simultaneously. Their defence of the Currie Cup had been progressing well, with five wins in their first six games putting them atop the Premier Division log. But since they’ve had to divide their resources to also compete in the Pro14, they’ve suffered 41-15 and 57-14 defeats to the Sharks and Western Province, teams they had beaten 47-12 and 30-17 at home in the opening two rounds.

This is hardly surprising, as they’ve prioritised the Pro14, which also reflects the views of SA Rugby. But this should not be such a handicap next season as the latter are in the process of changing next season’s Currie Cup schedule, beginning it in May and finishing it by September.

This will hardly curry favour with South African traditionalists, but the truth is that Currie Cup has lost much of its lustre in recent times. Springbok players have not been playing in their domestic competition since the mid-noughties.

The Cheetahs are also missing their two primary outhalves, Neil Marais and Fred Zeilinga, who are both liable to be sidelined until the New Year. But they have also shown enough in their games so far to suggest they will be competitive, not least at home, and will score tries as well as conceding them.

The Kings, drawn from three unions in the Eastern Cape and Western Cape, have had a chequered existence since being invented in 2009. Having had one season of Super Rugby in 2013, they were cobbled together again three or four weeks before the start of the 2016 Super Rugby season. They performed well this year, winning six of 15 games, which was more than the Bulls or Cheetahs managed, only to be culled along with the Cheetahs from the 2018 tournament.

By the time they entered the Pro14, about 30 players on their roster had moved on. Effectively therefore, they are starting from scratch for the second time in 20 months. But with a three-year Pro14 deal, they have time to rebuild, and they’ve shown they are capable of doing so.

Both the Kings and the Cheetahs are liable to be strengthened in January, and even more so again in time for next season’s Pro14, with some experienced players to supplement the young talent they have in their ranks. The prospect of playing against northern hemisphere teams may also appeal to prospective signings.

The lack of an alternative ground for the Kings’ home games is regrettable. The Boet Erasmus Stadium, home to Eastern Province when they hosted such teams as the British & Irish Lions in 1980, has been allowed to decay. But the paltry crowd in Port Elizabeth has to be put in the context of it coming after a heavy rainstorm that morning, and two-and-a- half hours or so after the Boks’ humiliation in Albany. It was also televised live by Super Sport 1, as will be the case with all the Kings and Cheetahs’ games.

Furthermore, on Sunday, Despatch – home club to Rassie Erasmus and Danie Gerber amongst others – drew a crowd of 10,000 to a club game. The Eastern Cape is a relative rugby hotbed, and unusually rugby has always held sway over football in the townships, so as well as talented players such as Siya Kolise, there is a support base to be tapped into once the Kings establish an identity. They could do worse, for the time being, than allow free entry to home games, as the Cheetahs did for the visit of Zebre.

They are also serving another purpose. The haste with which the Kings and the Cheetahs were granted late entry into the Pro14 assuredly indicates that they will be the precursors to further expansion. There is already interest amongst other South African franchises, as well as elsewhere. A Pro16, or even Pro18, is likely one day, and not before too long. The game changer will be if the newcomers are allowed to qualify for the European competitions.

In the meantime, patience will be a virtue. It may not seem so now, but there’s every chance the Cheetahs and Kings will ultimately be good for the competition.