IRFU: 2023 World Cup in Ireland would help growth of US rugby

Chief executive Philip Browne: ‘We have put a really, really forceful proposal on the table’ 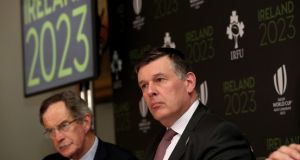 IRFU chief executive Philip Browne believes holding the 2023 Rugby World Cup in Ireland would pave the way for the US to host the competition. Photograph: Dan Sheridan/Inpho

Irish rugby chiefs will present their World Cup bid to the voting unions in London on Monday, September 25, with France and South Africa the other contenders.

Rugby World Cup will issue recommendations to the 39 voting bodies on October 31, before the final host decision is revealed on November 15th.

European club leagues are already eyeing the potential for US franchises, while America almost launched a bid for the 2023 World Cup.

The IRFU insist staging the 2023 tournament would push America ever closer to becoming serious contenders as future global competition hosts.

“If the rugby community is genuine about wanting to expand the sport, if they want to inspire people from other countries as potential hosts, then we believe we’ve made it easy for them to do that.

“What we’d see as a tripartite partnership has to be put in place, between Ireland 2023 if we win the bid, World Rugby and US Rugby.

“It’s about what can we do to increase the footprint of rugby in North America.”

The Irish advantage over rivals France would appear government commitment not to stage other major sporting events; France will host the Olympics in 2024.

Ireland’s 900-page bid document charts an economic benefit tipped to run to €1.5 billion, with organisers pledging to sell all 2.2million tickets at an overall rate of 30 per cent lower than England 2015.

A long list of 12 stadia will be whittled down to a potential preferred eight, with a fund of €65m for further upgrades, allied to €500m spent on Irish grounds in the last 10 years.

Architects Wilson Owens Owens (WOO), who worked on the London 2012 Olympics and Rugby World Cups 2015 and 2019, have consulted on those upgrades.

Newcastle Falcons hosted Saracens in Philadelphia at the weekend in front of a crowd just topping 6,000, while PRO14 bosses are still weighing the speed of their own US ambitions.

Asked if he would envisage Ireland hosting in 2023 paving the way for the US to stage a future World Cup, Browne replied: “I would hope so; the diaspora is not just about getting Irish Americans to come for Ireland to the World Cup.

“Ireland’s Test match against New Zealand in November last year drew a crowd of 62,500 — that’s the highest-ranking rugby event in the US.

“We worked very closely around the Chicago match with the promoters, who specifically targeted the Irish diaspora.”