Only most sand-obsessed ostrich could ignore yawning gap in rugby 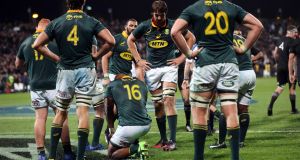 Exactly two years from now the next Rugby World Cup will kick off in Japan, and World Rugby are starting to twitch, judging by their public warnings to local organisers about the sluggish pace of preparations.

Get your pagoda in order now has been the theme ahead of this week’s two-years-to-go anniversary extravaganza at Shibuya 19 in central Tokyo.

Normally this would be a high-profile story but, right now, there seem to be more serious concerns, not least that Japan is at the heart of global geo-political tension with North Korea given a second missile test fired over the country in the past week. Rugby, meanwhile, has its own worrisome long-term problems to fret about.

Those South Africans still shaking their heads at last weekend’s 57-0 thrashing by the All Blacks are not alone: the scoreline sent a shiver down every traditional rugby spine from Bloemfontein to Buenos Aires.

The Springboks were supposed to be improving, the men in black still rebuilding. What if this yawning gap widens further between now and 2019? Only the most sand-obsessed ostrich could ignore the possible ramifications.

Because, without any question, a permanently sub-par Springbok side dangerously weakens the whole of Test rugby. The international game is not commercially bulletproof worldwide and relies on its trusty mix of delicious anticipation and competitive tension to keep interest alive.

Increasingly the Boks are struggling on both counts: they have lost 14 of their last 16 Tests against the All Blacks, their once-impregnable aura has evaporated, many of their best players have relocated to clubs overseas to earn more money and even their most ardent fans are wondering aloud if their days as a rugby superpower are gone for good.

Worse still is the fear that many of the hyenas circling the stricken Boks are weakening themselves.

Australia, despite a slight recent upturn, are struggling even to woo their own supporters, never mind the rest of the world – a crowd of 14,229 turned up to watch their first Test in Canberra in seven years at the weekend. Argentina, for their part, have lost 13 of their last 15 Tests, beating only Japan and Georgia, with their policy of picking only home-grown players threatening to unravel completely.

Then there is the United States where, as underlined in Pennsylvania at the weekend, 15-a-side rugby only really appears to catch the mass imagination when the All Blacks pitch up in Chicago. Sevens may yet prove a different story but its confirmation last week as a guaranteed Olympic sport until 2024 at least could destabilise the traditional game even more, as is happening with Twenty20 and Test cricket.

And so it goes on: France have won the Six Nations just once in the past decade, Samoa have been slipping backwards, the spectre of concussion and player welfare in general still stalks the sport, the professional players of the Premiership are muttering about strike action, the Pro14 is expanding because the alternative is too horrible to think about and none of the big English clubs are making a significant profit either.

All these issues have been variously flagged up before; the difference is that many are now flocking home to roost simultaneously. The Lions tour was a wonderful anachronism, temporarily blinding all of us to major issues elsewhere.

At this rate, even in the two-year window before the 2019 World Cup kicks off, we could be in for a 20-team tournament at which only two squads, at best, have much hope a) of lifting the trophy and b) not being reduced to a pulp at some stage.

Of course it is still only mid-term but a predictable two-horse race would be bad for the game as a whole.

While England are by no means yet the finished article, their 19 wins in 20 Tests under Eddie Jones do make them legitimate contenders. But if they cannot stop the All Blacks then who will?

Joe Schmidt’s Ireland, who have never been beyond the quarter-finals at any World Cup, an improving but still inconsistent Scotland or a Wales team awaiting an infusion of fresh blood? At this precise moment a black and white-dominated World Cup feels more likely.

At least the Celts on the summer Lions tour now know the All Blacks are not entirely invincible. With every passing day two things become clearer: what a fine job the Lions’ coaches did back in June and July under the most demanding circumstances and how lucky they were the All Blacks never managed to put all their most influential backs on the field collectively.

With Ben Smith or Damian McKenzie at full-back, Sonny Bill Williams and Ryan Crotty in midfield and Nehe Milner-Skudder on the opposite wing to Rieko Ioane, the range of options and attacking possibilities for Beauden Barrett at 10 borders on the obscene.

As the Lions demonstrated, though, absolutely no-one likes it up ’em in Test rugby. It should at least give the Springboks some heart: two years is plenty long enough to mount a comeback if the spirit is willing enough.

The Boks lost 49-0 to Australia in 2006 and still hoisted the Webb Ellis Cup the following year. England were embarrassingly bounced out of their own World Cup in 2015 and have barely lost since.

Maybe a similarly dramatic turnaround awaits this time as well: perhaps New Zealand’s galloping new breed of forwards such as Vaea Fifita, Ardie Savea and the fast-rising young internet sensation Asafo Aumua will get distracted by onrushing fame or injuries will slow down some of England’s exciting young wannabes.

Rather more important, frankly, is the growing need to preserve 15-man Test rugby across the globe. The next two years, for better or worse, could profoundly shape professional rugby’s future.

Aidan and Donnacha O’Brien banned from racecourses for Covid-19 breach 09:49
New money gets one over on old money as Man City defy Uefa 09:08
United slip up in top four race; reasons to be cheerful for Munster 07:00
Solskjær says Man United did not deserve to beat Southampton 06:36
Gerry Thornley: Munster will make for interesting case study when rugby resumes 06:30
Crossword Get access to over 6,000 interactive crosswords