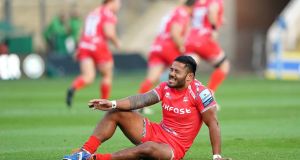 Sale powerhouse Tuilagi faces up to six months on the sidelines after tearing his Achilles tendon, in the luckless Samoa-born star’s latest injury setback.

Jones accepts that England do not boast a direct replacement for Tuilagi, given the 29-year-old’s unique line-breaking potency and skill set.

And the head coach has admitted he will have to devise a new blueprint for England to thrive in his absence.

“We’ll miss Manu greatly, he’s been a terrific team-mate, terrific team player, and we feel for him. But we move on, we’ll find other alternatives and other ways of playing.”

England will take on the Barbarians in the non-cap international on October 25th, before completing the delayed Six Nations.

The hastily-arranged Autumn Nations Cup will then follow on immediately, before the 2021 Six Nations should fall into its usual slot.

Tuilagi could miss that entire schedule, having suffered a new injury issue that typically requires careful and protracted rehabilitation.

Tuilagi left Leicester Tigers amid the coronavirus impact after contract disputes, walking away from Welford Road to join Sale as a free agent.

Sale boss Steve Diamond had only just hailed Tuilagi’s unbroken nine-match sequence of appearances for the Sharks when another injury issue struck.

Northampton’s Dan Biggar fell awkwardly and entirely accidentally on Tuilagi, and the England star wound up with his new injury problem.

Tuilagi spent years battling chronic groin problems at Leicester, that he later admitted he had exacerbated by hiding the extent of the injury in its infancy.

The candid and hugely-respected midfielder hit back to fitness and form in time for England’s 2019 World Cup campaign, however, driving Jones’ side to the final.

England could look to a more expansive game in Tuilagi’s absence, with Jones admitting new breakdown law interpretations could play into his side’s hands.

Should the new interpretations have the same effect at Test level as in club rugby, Jones admitted the increased speed of the game could help England ride out Tuilagi’s absence.

“But in other domestic competitions that hasn’t been the case so much.

“So we just have to wait and see what happens with refereeing at international level.

“We don’t have any indication at this stage where their emphasis is going to be, so we’ll just again wait and see what happens there.”