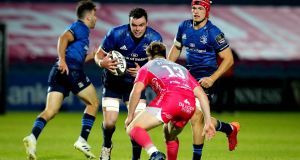 Leinster’s James Ryan runs at Nick Tompkins of Dragons during the Guinness Pro 14 game at the RDS. Photograph: Ryan Byrne/Inpho

Professional sportsmen and women are often said to operate within a bubble at the best of times, and although this has assumed a more literal meaning in these worst of times, nobody training within the provinces on Monday could have been unaware of NPHET’s recommendation that the country move to Level 5.

It was surely the off-field topic of the day within say Leinster, such would have been the potential consequences of Level 5 being imposed in even Dublin alone before reports emerged that the Cabinet will agree to place the State under Level 3, with added measures.

James Ryan, a keen student of history and politics, admitted: “I have been paying attention to it. Obviously I saw NPHET recommended Level 5 yesterday; whether the Government implements or it is another thing. I think, what, is there a decision made tonight?”

Informed that Level 3 across the country looked the likely next step, Ryan confirmed that head coach Leo Cullen had addressed the matter.

“Leo made the point this morning even, for us it’s a great opportunity to practice controlling what’s in our own hands and to being present. With all these distractions it’s really important for us to focus on our prep in the days and the weeks ahead, which can be hard at times. But as I said I think it’s vital we do that.”

Initially, Ryan struggled to find the right balance between keeping abreast of developments amid the pandemic but not becoming consumed by it.

“It’s probably not too healthy to be checking the news every night, is it? I got myself in the habit for the first few months, probably like most people, every night I was checking the cases. How many cases are there? How many deaths? And I think you can kind of get yourself caught up in an unhealthy habit there.

“I think just having a bit of time to step away from all of it is important, while obviously playing your own part, would be kind of my take on it anyway.”

Ryan has been living at home in Blackrock with his parents, Clare and Mark, his sister Kate, his twin brother Mark and his younger brother David, and said: “I think we just have to be extra careful really. We’re obviously tested every week which is important. Outside of that, we’ve just got to be responsible and make the right choices in terms of keeping in our own personal bubbles and our contacts small because it’s obviously pretty widespread. I think just making the right choices is important for us.”

For their Argentinian attack coach, Felipe Contepomi, it’s been less of an issue.

“Maybe because of my language I focused on what we can do. I always speak about controlling the controllable, and something we learned from this period is that there are things we can control and we can’t waste energy on those [other] things.”

Hence, his focus was Saturday’s “difficult” game away to Benetton.

“That’s all of our focus. Then the news that comes next, we’ll have to adapt and see what is next if, but it’s a big if, and we don’t want to stay thinking too much on those ifs.”

Contepomi intimated that Leinster will pick a strong side given their internationals will be on Irish duty after this game until December, so there’ll be plenty of opportunities then to delve into their squad.

Johnny Sexton won’t be playing, due to the hamstring injury which forced him off in the first quarter of last Friday’s win over the Dragons, but Contepomi was optimistic the Irish captain will be fit to face Italy in three weeks’ time. “I think he’ll be fine, yeah definitely.”

Asked about Sexton’s age possibly delaying his recuperative powers, ‘Dr Phil’ quipped: “I think you know how muscle is composed of quick fibres and slow fibres, I think I have all slow fibres because I never tweaked a muscle, so I don’t know how that feels. I’ve been lucky.

“But it’s not about age, I think it’s more about how you look after yourself, how you prepare and Johnny’s the full pro, so it’s definitely that he’s been training brilliantly and he’s in very good shape.

“There are a load of components, it’s not just age that will tell you ‘oh, will take you longer’ or ‘you will heal quicker’, there’s a lot of variables.

“In his case, he’s a quick healer normally and he’s a guy that hasn’t got, touch wood, too many bad injuries in his career. He’s a guy that you can say he’s robust and hopefully he’ll be running completely fully fit for the internationals.”

“Yeah, that’s not a minor injury, definitely, but we haven’t got the final diagnosis because sometimes the clinical assessment and the scans, they don’t talk the same language, so you have to get an expert or consult with someone to make the final diagnosis and that’s the point where we are at.”