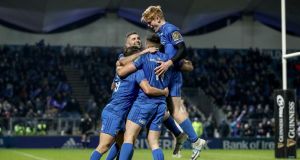 Cian Kelleher (back to camera) is congratulated after scoring a Leinster try by Jamison Gibson-Park, Rob Kearney and Tommy O’Brien during the Guinness Pro 14 game at the RDS. Photograph: Dan Sheridan/Inpho

It was a contest that was difficult to pigeon-hole. Leinster scored eight tries, conceded six, including four of the last five as the home side were guilty of switching off mentally and physically in the last 15 minutes of a clash between first and second in Conference A of the Guinness Pro14.

Leinster led 47-14 with little over half an hour and few would have countenanced such was their dominance that it would be the visitors that monopolised the scoring from that point to the finish. Leinster head coach Leo Cullen may view it as a game of thirds, the first two of which his side were utterly dominant, only to fall away, appreciably in many respects.

Robbie Henshaw was excellent, Harry Byrne too at outhalf, Tommy O’Brien had a fine debut, Cian Kelleher looked sharp while up front Scott Penny and Max Deegan scored a brace of tries apiece. Ulster coach Dan McFarland will be pleased at his side’s tenacity but how much can be ascribed to Leinster’s laxity shouldn’t detract from the effort too much.

Leinster’s discipline was an issue periodically and late-on but it didn’t appear as wanton or one-directional to the naked eye as George Clancy and the officiating cohort stipulated.

There was an eye-catching fluency to Leinster’s attacking patterns, equally effective whether sweeping the ball to the touchlines or using a more direct and brutal carrying approach.

Ulster weren’t allowed to breathe for much of the first half, dragged remorselessly from pillar to post, literally. They lost most of the important collisions and once Leinster got within sight of the try-line, they capitalised.

Tommy O’Brien put Kelleher away on the outside on two minutes, Leinster pummelled their way forward through a dozen more phases before Deegan showed good athleticism to stretch and twist his way over under the posts. Byrne added the conversion.

Ulster did rally briefly when the home side coughed up three penalties inside their 22, the visitors went to the corner each time. Having mauled twice, they shaped to do so again but this time worked the ball wide with Angus Kernohan demonstrating good feet to squeeze between three covering defenders.

It was a brief respite for McFarland’s side, they lost centre Matt Faddes to a yellow card for a high tackle on Tommy O’Brien; it looked worse in slow motion.

The home side helped themselves to a brace of tries in Faddes’ absence, both of which were scored by flanker Penny, his fourth and fifth of his 10-cap career to date in a blue jersey.

Leinster secured a try bonus point on 27 minutes, Kelleher’s slaloming run breaching the initial defence from Byrne’s long cut-out pass, and then the outhalf demonstrated his vision with a pin-point cross-kick that enabled Henshaw to gallop over unopposed.

Faddes marked his return with an opportunist try after Gibson-Park couldn’t hold Deegan’s pass but the home side ended the half as they had begun it, in the ascendancy with a fifth try, this time a quarterback sneak from Fergus McFadden.

The avalanche of points resumed four minutes after the interval with a try for Rob Kearney, the outstanding Henshaw once again taking a short-cut through the Ulster midfield. Leinster then switched to the a la carte menu, Byrne’s perfectly flight cross-kick to Henshaw from a quick penalty the preamble to Kelleher’s third try since returning to the province.

Angus Curtis’ misfortune continued, removed on a stretcher with a leg injury; Kernohan switched to centre and flanker Nick Timoney moved to the wing. Both teams emptied the benches, which meant a debut for Hawaiian born Roman Salanoa, a late addition in place of Jack Aungier (ill).

There was a touch of the season of goodwill in Ulster’s third try as Craig Gilroy intercepted Penny’s pass and had no trouble accelerating away from the cover over 50 metres. Greg Jones grabbed the visitors’ four-try, bonus point on 64 minutes; in between the two Ulster tries, Leinster number eight Deegan crossed for his second off the back of a scrum close to the Ulster line.

To their credit the visitors showed character in scoring four of the last five tries, Jones adding another from a lineout maul.

The game had lost all shape and cohesion due to the raft of replacements, resembling a training session for much of the final quarter of the match but that shouldn’t detract from Ulster’s spirit in adversity. McFarland will be pleased with the moxie shown by his young side.