Ireland international was stretchered off during Munster’s loss to Saracens 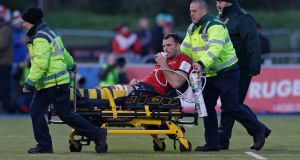 Tadhg Beirne goes off injured during the Heineken Champions Cup Round 4 match between Saracens and Munster. Photo: Henry Browne/Getty Images

Tadhg Beirne will have to undergo surgery on his ankle after it was confirmed that he fractured it during Munster’s loss to Saracens on Saturday.

The Ireland international went over on his ankle awkwardly in the 11th minute of the clash at Allianz Park and was stretchered off while also being administered oxygen.

On Monday night Munster confirmed that he will need surgery and didn’t give any time frame for when he will return.

The update also confirmed that captain Peter O’Mahony missed the match with a low grade adductor injury while John Ryan suffered a calf strain and Andrew Conway failed a HIA.