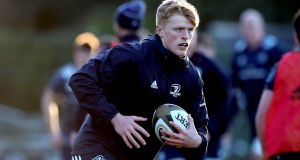 Tommy O’Brien: the 21-year-old gets a first start with Leinster when he partners Robbie Henshaw in the centre against Ulster at the RDS. Photograph: Ryan Byrne/Inpho

Where to look in Leinster this week? Johnny Sexton chased by France; Tommy O’Brien’s first start for the province; Harry Byrne continuing the brother in arms conflict with Ross for the outhalf position and making his second senior team start; Will Connors catching the eye of Andy Farrell.

There is also Rob Kearney and how he will react to being shown the cold shoulder by Ireland.

It is a Christmas derby with a series of parallel narratives and that’s just Leinster, who have a wary eye on making it clean through to the end of the calendar year without defeat since the beginning of the season.

Ulster tonight and Munster next week will have their say on that prospect but man to man in Dublin’s RDS, this body of largely non-European starters have been ripping it up for Leinster.

Taking out Caelan Doris, Josh van der Flier and Rhys Ruddock and Leinster still have an eye-catching back row of Connors at blindside, Scott Penny on the openside and Max Deegan at number eight. They face Dublin lads Greg Jones and Nick Timoney and Ballymena man Matthew Rea in the Ulster back row.

For their lock combination, Ulster diplomatically pick both brothers David and Alan O’Connor, the younger David, who signed over the summer, making his first start.

“The couple of games he’s played, Glasgow and Connacht, are probably the two real standouts. It’s just the numbers. He has a real point of difference in terms of his speed off the line, to put pressure on the opposition attack, particularly the opposition ten.

“He’s been really good there, so it wasn’t a massive surprise to see him selected. He offers something that little bit different and that’s what they [Ireland] were perhaps drawn to.”

Cullen sees his selection as an exciting Christmas cracker more than a team to play between European weekends and international matches.

He has a valid point and his claims of a super-competitive larger squad ring true. With Robbie Henshaw, Andrew Porter, Kearney, captain Scott Fardy, Fergus McFadden back and hooker Sean Cronin, the latter making his first start of the season after injury, it’s not exactly a callow Leinster side making its way to the rugby heartland.

Ulster are also shorn of many of their frontline players like Iain Henderson, Stuart McCloskey, Jordi Murphy, John Cooney, Billy Byrne et al and when it comes to matches like these, especially in Dublin, Leinster have not been wanting.

To drive home the point Ulster have packed their bench with Ulster Academy prospects, Jack Regan, Azur Allison and Stewart Moore, all set to earn their first senior cap along with sub-Academy back, Ethan McIlroy.

Debutant O’Brien will partner Henshaw in the centre in an interesting combination. The 21-year-old has five caps for Ireland Under 20s and has played with Leinster ‘A’ while playing with UCD in the All-Ireland League. He has pace too – he’s a former Leinster Schools 110m hurdle champion while his father and sister represented Ireland in athletics.

“I think it’s an unbelievably exciting selection by us, that’s how I’d look at it,” said Cullen of his Leinster selection.

“There’s lots of guys who deserve to be picked. They show up all the time in training and they’re dying to play. They have a genuine chance of being selected in all the games moving forward. We want to reward guys who are playing well.”

The bald facts of previous away matches against Leinster are not encouraging for the visitors’ hopes of an upset. Leinster have not lost to Ulster or any Irish province at the RDS since 2013. They have also scored the most tries this season after seven rounds, conceded the fewest and now face Dan McFarland’s side on an 11-match winning run. It’s difficult to see that being halted tonight.