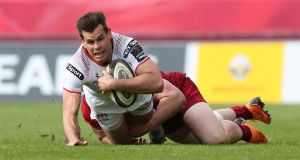 Louis Ludik: returns to the Ulster starting line-up for the first time since May. Photograph: Billy Stickland/Inpho

A depleted Ulster – minus eight players away with Ireland – return to Pro14 action on Friday night following the November break with a testing-looking encounter at the Scarlets where the visitors have not won since December 2012.

After two straight Pro14 victories, Dan McFarland’s squad find themselves second in Conference B and sit just one point ahead of the Scarlets.

This will be a foretaste for both squads as they meet again in next month’s back-to-back rounds in the European Champions Cup.

Experienced utility back Louis Ludik returns for the first time this season after shipping a hamstring injury in last May’s Champions Cup play-off win over the Ospreys.

The Irish-qualified South African lines up at centre alongside 20-year-old Ulster Academy player James Hume, who is 12 years younger than Ludik.

The promising Michael Lowry – a contemporary of Hume’s – is at fullback while youthful Ireland Sevens player Robert Baloucoune makes his third appearance for the senior side on the right wing with experienced Wallaby Henry Speight on the other flank.

Billy Burns and Dave Shanahan are at half-back again while former Leinster U20s player Eric O’Sullivan gets the nod at loosehead prop in a front row which includes Adam McBurney and Ireland international Marty Moore.

Springbok Marcell Coetzee is at flanker and one-third of a strong back row with Sean Reidy at openside and Nick Timoney at number eight. The side is led by lock Alan O’Connor.

Secondrow Ian Nagle is set to make his Ulster debut off the bench after joining the province on loan from Leinster.

The Scarlets, also weakened by international call-ups, welcome back Tom Prydie on the wing after a spell out with injury.

This will be the second time the sides have met this season, with Ulster winning 15-13 in Belfast in the opening round of Pro14 games back in September.

1 In turmoil on and off the pitch: Where did it all go wrong for Barcelona?
2 College football turns blind eye to Covid-19 by risking players' health
3 Rugby impasse continues as no deal reached in fourth round of IRFU salary talks
4 Limerick’s Shane Dowling forced to retire at 27
5 Martina Navratilova a leader in her time, and for ours
Real news has value SUBSCRIBE

Six to go forward for Aidan O’Brien in Saturday’s Epsom Derby 15:15
‘Several’ players have withdrawn from snooker World Championship 13:48
Limerick’s Shane Dowling forced to retire at 27 12:43
Martina Navratilova a leader in her time, and for ours 11:59
In turmoil on and off the pitch: Where did it all go wrong for Barcelona? 11:47
Here is your handy guide to sport on television this week