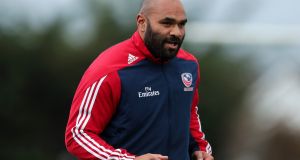 Former Chicago Bears running back Paul Lasike will start at inside centre against Ireland on Saturday. Photograph: Laszlo Geczo/Inpho

Head coach Gary Gold expects the United States’ “greatest challenge yet” when facing Ireland in a bid to complete the perfect season.

The Eagles need a 10th straight Test victory to seal a 100 per cent return for the calendar year, but know they must step up considerably to beat Ireland.

Harlequins’ ex-Chicago Bears running back Paul Lasike starts at inside centre as one of eight UK-based stars in the USA’s starting XV.

“We know this weekend will present our greatest challenge yet with the Ireland side still buzzing from their historic victory over the All Blacks,” said Gold.

“Ireland will be relentless as ever this weekend and our guys have spent the last week ensuring that they approach Saturday’s game with the level of intensity that will put us in the best position to meet the fight.”

Expecting a fine tussle between physical inside centres Lasike and Ulster’s Stuart McCloskey, Schmidt said: “They are the only unbeaten international side I can think of this season.

“They are nine from nine, so especially putting into context their win over Scotland this summer, if you’re not absolutely on the money then there’s a big risk for us.

“So it certainly helps focus the mind, focus the training and allows you to leave behind last week, as special as it was for us.

“I wanted Stu [McCloskey] to get in between a couple of ball-players this weekend, but challenge him to be a ball-player as well.

“I think we know he’s a ball-carrier, we know how strong he is. Paul Lasike is one of the few men in world rugby who is actually bigger than him in his face-to-face positional challenge.

“So going up against an ex-Chicago Bear and a very talented player, it’s a big challenge.

“But also we want to see Stuart’s ability to link, and I think his ability to stay connected defensively and make good decisions.

“At the same time, we’re looking forward to seeing him deliver his strengths, but challenging him on those things we’ve seen improve through his performances in Ulster.”