Kieran Read: All Blacks need to deliver ‘best performance of their season’ 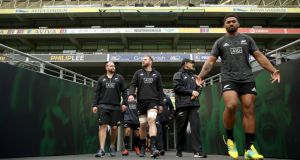 All Blacks captain Kieran Read believes his side will have to deliver “the best performance of their season” in order to beat Ireland at the Aviva stadium on Saturday night.

And the New Zealand number eight is under no illusions of the physical challenge which awaits the back-to-back world champions under the Lansdowne Road floodlights.

Memories of 2016 loom large, when the touring Kiwis exacted revenge on Ireland with a brutal 21-9 win in Dublin, two weeks after their defeat at Chicago’s Soldier Field.

And with the victors likely to leave the Aviva pitch with the unofficial tag of the best team in the world, there will be plenty of edge to proceedings – with Ireland coach Joe Schmidt predicting a “spiky” encounter.

Read, speaking pitchside at Friday’s captain’s run, agreed with Schmidt’s assessment: “Sure, there’s going to be a lot of emotion and a lot of heat out here, which is what you want to see when two big teams come up against each other.”

When the 116-cap veteran was asked again about how physical Saturday’s Test for the ages will be, he almost bristled: “Physicality and intensity wins Test matches, so we’re going to have to be up in that area,” he said.

The touring Kiwis have played 12 Test matches since their epic 2018 campaign began against France on June 9th.

They have won 11 – losing once to the Springboks – while both South Africa again, and England last weekend, have lost narrowly after dragging the All Blacks into the trenches.

Although they have a final Test of the calendar year to come against Italy in Rome next weekend, Read says the All Blacks are ready to peak against Ireland.

“Oh we’re going to need the best performance of our season I think, with the way the Irish have been playing.”

And while England pushed the All Blacks to the very edge at Twickenham – with a disallowed Sam Underhill try proving the difference – Read is clear who he believes to be the best team in the northern hemisphere.

“It’s been on the calendar for a while I guess, 12 months, but yeah it’s an exciting time,” he said of Saturday’s Test. “I think any game when you come across to this part of the world is exciting. These teams are playing really well – and Ireland are undoubtedly the best side up here at the moment.”

But what impresses Read so much about Joe Schmidt’s Ireland?

“Many things really, they’re a very structured side. Look, in terms of how they hold onto the ball, probably the best in the Tier One nations of the world, and also their ability to defend very strongly as well. They’re a good side.”

The lineout is normally Ireland’s lifeblood but it malfunctioned during last weekend’s 28-17 win over Argentina.

Devin Toner is back to shore up the set-piece on Saturday but does Read -–who runs an All Blacks lineout operation which completely decimated England in London – sense any Irish vulnerability?

“We’ve certainly done our homework on their lineout and to be honest they’ve been fairly strong over the course of the last six-12 months.

“There are always opportunities. For us, we just pride ourselves on getting in the air and hopefully trying to disrupt as much as we can, so we’ll try and do that again.

“We’ve got to find our opportunities, we can’t be too hungry to look those for those opportunities – just be patient. Discipline is going to be crucial.”

On Saturday Aaron Smith will make his 82nd Test appearance, making him the most-capped All Blacks scrumhalf of all time.

While the two best teams will be meeting at the Aviva, the world’s two best number nines won’t be, with Conor Murray’s ongoing neck injury ruling him out.

And Read – who possesses a symbiotic relationship with the diminutive Smith – paid tribute to the halfback before his milestone match: “You can’t look past his pass, there’s probably no better in the world than Aaron.

“Look he’s been a great foil for me as a number eight and we’re good mates off the field so I’m really pleased for him.”

So on to Saturday night, as the famous All Blacks look for one final hurrah, to remind both Ireland and the rest of the world of the natural order of things.

“I feel we are in a pretty good space right now mentally. Physically we’ve done the best we can as well.”

We’re about to find out if the best is good enough.