Union has faced claims of financial mismanagement from former CEO 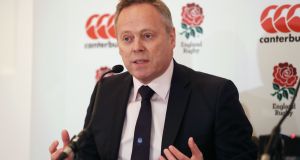 Steve Brown is stepping down as Rugby Football Union chief executive at the end of the year, the governing body has announced. Photograph: Steve Parsons/PA Wire

Increasing disquiet about the English Rugby Football Union’s financial position has triggered the abrupt departure of Steve Brown as chief executive. Brown will leave the world’s wealthiest union next month after less than 15 months in the role amid claims by one of his predecessors, Francis Baron, of financial mismanagement at Twickenham.

The former England captain Nigel Melville is to act as interim chief executive until a replacement is found for Brown, who joined the RFU in 2011 and held a number of roles including chief financial officer before he replaced Ian Ritchie in the top job. Despite the huge windfall of hosting the 2015 Rugby World Cup, the RFU had to make 64 people redundant this summer and its finances are under growing scrutiny.

A critical report compiled by Baron, who was the RFU’s chief executive for 12 years until his retirement in 2012, has suggested the union has incurred net losses of £46.4 million (€52.15 million) over the last six years, not including a one-off profit of £26 million (€29.2 million) it received as a result of hosting RWC 2105. The cost of the East Stand’s new corporate facilities has also risen sharply, from £53.5 million (€60 million) to £81 million (€91 million), while the RFU is said to be poised to increase its borrowing to £90 million (€101 million) next year.

In addition there are those within the union who believe spending has not been kept sufficiently under control given the £220 million (€247 million) eight-year deal signed with the leading English clubs in 2016. The costs of running the national team have also spiralled, with the summer tour of South Africa going substantially over budget and significant compensation having to be paid to the Blue Bulls for the recruitment of defence coach John Mitchell.

Brown also committed the union to a further hefty sum at the start of this year by renewing Eddie Jones’s contract for a further two years, since when England have lost six out of 10 Tests. The union has already indicated grassroots funding is set to suffer with a £50 million (€56.2 million) programme to install artificial pitches around England, a key legacy of the World Cup, now under review.

On the plus side Brown, as managing director of the tournament organising committee, helped to ensure the 2015 World Cup was an outstanding success and was well liked by his staff. He originally trained as an accountant in the National Health Service and has been an occasional session guitarist in his time. His tenure as chief executive, however, will now be remembered for its brevity, with the RFU’s finances certain to be the subject of intense fresh interest.

“This is a sad day for the Union,” said the RFU’s chairman, Andy Cosslett. “Steve has been a pivotal figure during a long period of sustained growth for the Union and played a key role in delivering Rugby World Cup 2015. His tireless work ethic and selfless attitude has won him the respect of all who know him and the game will be extremely sad to see him go.”

Brown, who described his role as “the job of a lifetime” when he took over from Ritchie, said: “This has been a very difficult decision for me to make. I informed the RFU board earlier this week that the time is right for me to step down and take some time out. I’ve loved my time in rugby and am deeply proud to have made a contribution to a sport I love. It has been a fascinating seven and a half years.”

Melville, who already has his hands full as the RFU’s director of professional rugby, spent a decade at the helm of USA Rugby before returning to the UK in 2016 to take on his present role. - Guardian