Late call by Jones on whether to play Tuilagi against Australia 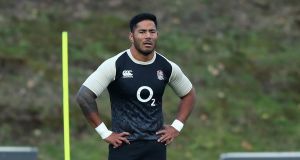 Manu Tuilagi during the England training session on November 21st. He was put through his paces on his own, away from the rest of the backs, before joining in full training. Photograph: David Rogers/Getty Images

Eddie Jones was on Wednesday night set to make a late call on whether to unleash Manu Tuilagi against Australia on Saturday.

Tuilagi has not played for England for more than 2½ years, but took part in a make-or-break training session on Wednesday afternoon, with Jones mulling over whether to include the heavyweight centre when he names his squad on Thursday.

Tuilagi was put through his paces on his own, away from the rest of the backs, before joining in full training, but Jones has been adamant throughout the autumn that he must be “100 per cent” to play.

On Monday, Jones described Tuilagi as “very doubtful”, but on Tuesday he was retained in a 26-man squad, with the Rugby Football Union confirming he was “in contention”.

Confusion has surrounded Tuilagi’s fitness – the RFU said it was a groin injury that denied him a place on the bench against South Africa at the start of the autumn, but England then revealed it was an adductor problem that ruled him out of contention to face Japan.

There is little doubting Jones is desperate to see Tuilagi on the field – he has played only once for him, off the bench against Wales in the 2016 Six Nations and last started for England in the summer of 2014 – but the head coach did on Monday suggest he was willing to be patient with Tuilagi in order to get him right for next year’s World Cup.

If Tuilagi is selected it would most likely be among the replacements, and while defence coach John Mitchell confirmed the decision ultimately rested with Jones, he suggested he would not pick him to start if it were up to him.

“Experience tells me that would be a challenging selection,” said Mitchell.

Jones is due on Thursday to name a 23-man squad, with Elliott Stooke the most likely forward to be cut. Sam Underhill is expected to come back into the backrow, while how Jones decides to deploy Courtney Lawes will have an impact on the make-up of the rest of the pack.

From the backs, two of Tuilagi, Piers Francis and Joe Cokanasiga are likely to be released, though the latter is pushing Jack Nowell for a start after his impressive debut against Japan.