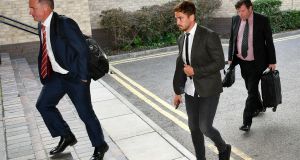 Danny Cipriani is free to make his first Gloucester appearance on Thursday after avoiding any further punishment from the English Rugby Football Union on Wednesday night, escaping with what amounts to a slap on the wrist.

The RFU charge of “conduct prejudicial to the interest of the game” was upheld after around five hours of deliberation by a disciplinary panel but Cipriani faces no sanction other than a stern rebuke for his behaviour. As a result he is set to feature in Gloucester’s pre-season fixture against the Dragons and will be free to start the Premiership campaign with his new club.

He will also be available for selection for England’s next training camp in late September – provided Eddie Jones chooses to pick him – as well as the autumn internationals. Cipriani, who contested the charge, will therefore be mightily relieved, having made only his first England start for 10 years in June while the RFU – criticised by both Gloucester and the players’ union for intervening – emerges with little credit.

The three-man disciplinary panel ultimately decided that no further action was warranted after Cipriani was fined £2,000 and given 10 hours’ community service by Gloucester on Monday, on top of the £2,000 fine he was given by Jersey magistrates court last week following convictions for common assault and resisting arrest at a nightclub incident in Jersey.

“Danny Cipriani is expected to behave in line with the core values of the game which include respect and discipline,” said Gareth Graham, who chaired the panel. “Those core values are not empty words or slogans as the panel were reminded during the hearing. Mr Cipriani is a role model and by committing an act of common assault and by resisting arrest, the panel find his actions are prejudicial to the interests of the game.”

The decision should bring an end to a sorry episode and the drawn-out row that followed the RFU’s decision to charge Cipriani last Friday with the governing body facing fierce criticism from both Gloucester and the Rugby Players’ Association. Both Gloucester and the RPA felt the RFU was guilty of “singling out” Cipriani and bowing to public pressure but the governing body insisted there was a case to answer. The panel supported the RFU’s decision to charge Cipriani, insisting it was “appropriate”, but the fact that no further sanction was imposed raises the question of why Cipriani was in the dock on Wednesday night, having already been disciplined both in court and by his club.

Graham added: “The panel do not agree that this is a ‘minor’ incident or ‘trivial’ and, whilst they endorse the actions of Gloucester in fining Mr Cipriani and ordering that he complete 10 hours of work in the community, find that the decision of the RFU to bring a charge was appropriate.”

Gloucester released a statement shortly after the verdict was announced in which the club’s chief executive, Stephen Vaughan, said: “Whilst disappointed at the verdict this evening, we accept the decision of the panel, particularly concerning the way Gloucester have handled the matter. We believe that the panel’s decision not to impose any additional penalty endorses our approach. We now look forward to the start of the season and putting this incident behind us.”

James Haskell, a former Wasps team-mate and another England international who enjoys a high profile, believes Cipriani was the victim of “trial by social media” and that he was “thrown under a bus” by a number of former players and coaches who voiced their disapproval. The former England coach Clive Woodward was among those to speak out, claiming Cipriani’s England career should be brought to a end.

“It’s just the oldest case of trial by social media. Everyone does that now and that is the pain of social media with everyone who is ill-informed and knows nothing,” Haskell said. “People love to hate [Danny], but I know him as a good hard-working guy and it is time to move on. It was time to move on an hour after the court case – but a few ex-players and coaches threw him under the bus for easy headlines. Hopefully when I am finished playing I can get paid to come out with crap as that seems like the thing to do.”

Haskell also feels that modern day rugby players are under greater public scrutiny than ever. He added. “You’ve just got to be whiter than white and don’t put yourself in those positions. It is unfortunate that when you have a profile, everything is multiplied by one million.” - Guardian service