Matt Williams: Lack of leadership is the reason for Ireland’s on-field crisis

Schmidt’s exit and the slump in form of Sexton, Murray and Best has changed something 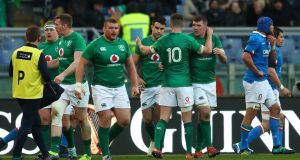 Ireland’s muted celebrations after Conor Murray secured a bonus point against Italy. The body language of the Irish team in Rome was telling. Photograph: James Crombie/Inpho

Last year was the greatest 12 months in the history of Irish rugby. After the extreme highs of a Grand Slam, a winning series in Australia and defeating New Zealand on home soil for the first time, some type of performance hangover was to be expected.

While one defeat does not create a national disaster, what is deeply concerning is the speed with which the towering self-belief of 2018 has evaporated and has replaced by self doubt. Doubt is a terrible thing in an athlete’s mind – the exact opposite of belief.

If we follow McCaw’s definition, then the doubt that has descended over the entire Irish camp is affecting their behaviour. We have all seen the lack of organisation in attack, the dropped passes and lost lineouts from players and poor selections from staff.

McCaw goes on to say that body language “positive or negative, exposes your thoughts and feeling”. In Rome, we saw hands on hips, fingers on faces; we could not hear any words of encouragement, eyes were turned to the heavens, searching for answers. Johnny Sexton kicked at a towel on the sideline and swore about his team-mate’s performance. All this tells us that the players are frustrated.

A player’s body language communicates a clear message to us, the supporters, and more importantly to opponents. The message is that this Ireland team has lurched from credible World Cup contenders to a group in a performance crisis in a matter of weeks. They are vulnerable.

There is a sinking feeling that, unthinkably, this wonderful team has peaked a year too early and is now in a state of decline. The depths to which that decline will plunge before it is reversed are unclear, especially to those inside the team.

How could this state of affairs come to pass so quickly?

As far as we can observe, only two things have changed since last year.

The most significant of these is the announcement that Joe Schmidt will be leaving the team after the upcoming World Cup. Much of this Ireland team’s success has rightly been attributed to Schmidt’s excellent coaching and his creation of a unique winning culture. He is what is termed the “cultural architect” at the heart of this Irish team. Like Alex Ferguson at Manchester United, Joe has created this team’s culture from his vision.

This type of culture, created by a dominant individual, is unlike that of New Zealand. James Kerr in his book, Legacy, studied the creation of the New Zealand rugby team’s culture from the failures of the 2007 World Cup, to getting their hands on the trophy in 2011. Kerr concluded that Graham Henry’s team designed their own culture. It was developed and owned by the group, not one dominate architect.

In The Barcelona Way – Unlocking the DNA of a Winning Culture, Damian Hughes describes the winning culture at the Barcelona. Like Kerr, he concludes that cultures grown organically, by an entire organisation, can be successfully passed onto the following generations. Cultures created by one dominant cultural architect rarely survive past that figure’s departure.

In 2001, Ferguson announced he was leaving Manchester United at the end of that season. The team’s form crashed and he later admitted that “the biggest mistake I ever made was announcing I was leaving at the start of the 2001-02 season”. Ferguson changed his mind in January 2002 and United started to win.

Sometimes the “law of unintended consequences” smashes into the best of intentions. Like the players at Manchester United, something has changed in the minds of the Irish players.

There is one other change since 2018. Time has moved on. The form of the team’s great players and key leaders has dropped alarmingly.

Which forces us to consider if Father Time has caught up with Johnny Sexton, Conor Murray and Rory Best? The wonderful, rugby playing Australian poet, JAR McKellar, in his beautiful poem, Football field: Evening, says it best.

“Quick as the ball is thrown from hand to hand

And fleetly as the wing three-quarter run,

Swifter shall Time to his defences stand

And bring the fastest falling one by one.”

It is as if the rugby gods flick a switch, and the once great athlete, in an instant, has aged never to return to the heights of his youth.

The lightning fast sprinter is slow. The great boxer is knocked out by a mug.

Sexton, Murray and Best are wonderful players and great servants of Irish rugby but they are sorely out of form. Having lost their form, they have stopped leading. Their leadership is compromised by their poor form.

Leadership is not captaincy. Every time a player takes the field he is a leader and must do his job. Leadership is what you do, not what you say. If you can’t do your on field job to the required standard, you cannot lead.

They must perform and lead or be replaced. No one owns the jersey.

A dramatic form slump, negative body language, a loss of the team’s performance culture, players arguing, swearing, not leading. After 2018, it is almost incomprehensible that these terms can be used to describe the Irish rugby team of 2019.