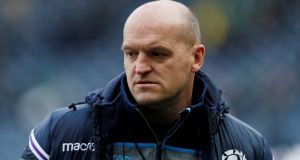 Gregor Townsend is without a number of key players for the trip to Paris. Photograph: Russell Cheyne/Reuters

Gregor Townsend believes opportunity knocks for Scotland in Paris despite his side being denied the services of a string of top stars.

Talisman Finn Russell, fullback Stuart Hogg, centre Huw Jones and backrower Ryan Wilson have all been ruled out of Saturday’s clash against Les Bleus as Townsend’s injury woes continue to mount up.

Russell and Jones’ slots have gone to the Glasgow pair of Peter Horne and Nick Grigg, Edinburgh’s Blair Kinghorn — who scored Scotland’s first ever Six Nations hat-trick against Italy from the wing — reverts to his favoured number 15 jersey, while club-mate Magnus Bradbury takes over from Wilson.

Scotland suffered defeat last time out against Ireland but Townsend is confident his understudies can steer his team to their first victory at the Stade de France in 20 years.

He said: “Injuries create opportunities for others to show what they can do and, throughout the past couple of seasons, we’ve seen a number of players really step up.

“All of the players coming in started against Argentina in the summer, which ranks as one of our best ever away performances.

“On top of that there is cohesion forged through familiarity at club level — Magnus in the backrow lines up with clubmate Jamie Ritchie, and Pete Horne and Nick Grigg are either side of Sam Johnson in the backs.”

The injury blows combined with this month’s 22-13 defeat to Joe Schmidt’s men at Murrayfield have threaten to dampen Scottish enthusiasm for this year’s championship.

France too have not had their troubles to seek having blown a 16-point lead against Wales in their tournament opener before crashing 44-8 to the English a fortnight ago.

But Townsend, who started at outhalf for the Scots the last time they triumphed at the Stade de France back in 1999, is well aware of the potency of the French on home soil.

He said: “At home, France have played really well in the past two Championships. They were 16-0 up at half-time against Wales, and their previous Six Nations games before included a win over England and a last minute defeat to the eventual Irish team that went on to win the Grand Slam.

“They are a very dangerous opponent, combining power, ambition and skill. Their individual talent is outstanding and, when they get things right — which has predominantly been in the Six Nations at home — they’ve played with a real collective spirit and fed off the emotion of the crowd.

“They will certainly be fired up following their loss at Twickenham.

“Like France, we too are coming off the back of a defeat and want to show a better picture of ourselves and play closer to our potential.

“The players invested a huge amount of effort against Ireland and this energy will be essential once again this weekend.”