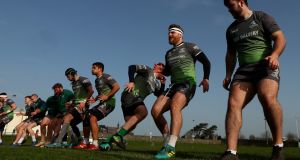 Connacht have been boosted by the return of Ultan Dillane, Quinn Roux, Tom Farrell and Caolin Blade from international duty for the visit of the Ospreys to the Sportsground on Saturday (Kick-off 2.45pm).

Dillane and Roux continue their secondrow partnership - they started the Six Nations game against Italy last weekend - and join a front five that includes props Denis Buckley and Finlay Bealham with Shane Delahunt coming in at hooker.

The backrow remains unchanged from the 43-17 defeat to Glasgow last Friday night, with captain Jarrad Butler starting at number eight and Eoin McKeon and Colby Fainga’a at blindside and openside respectively.

Kieran Marmion starts his second game in a row at scrumhalf after returning from injury. He forms a halfback partnership with Kyle Godwin who comes in at out half.

In the midfield Peter Robb gets his first start of the season after impressing off the bench last time out. He is joined in the centre by the returning Tom Farrell.

The back three is unchanged with Stephen Fitzgerald and Matt Healy on the wings and Tiernan O’Halloran at fullback.

With Connacht sitting three points ahead of Ospreys in Conference A of the Pro14, head coach Andy Friend knows how important a home win could prove:

“We have trained well and prepared well this week. We have seen a really positive response from the players after a disappointing result last weekend in Glasgow. We will continue to focus on our game and what we can control, as we have done all season. We know every game now is a must win and with a two week break before our next game we are determined to finish this block on a high.

“We are boosted by four of our players coming back from international duty. They bring a huge amount of experience to our match day squad”, he added.