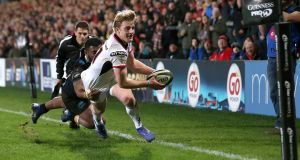 A first half hat-trick from Rob Herring, all from driving mauls, helped Ulster on their way to only their third try bonus of the Pro14 campaign as they went on to score eight tries to see off Zebre.

The result also took Ulster up to third in the league’s Conference B in what is a tightly fought battle to make the play-offs - back-to-back victories now giving Dan McFarland’s side some well-timed momentum.

Rob Lyttle was Ulster’s top scorer with a 17-point haul from a try and six conversions.

Louis Ludik, Robert Baloucoune and Peter Nelson got Ulster’s other tries with a penalty try also coming their way against Michael Bradley’s struggling side whose only score was from a first half penalty try which saw Ludik binned.

The bonus point was secured right at the end of the half as Lyttle made the left corner and then superbly converted his score to give Ulster a 26-7 lead.

Ulster were awarded their penalty try two minutes after the restart when they went for another driving maul over the line - Herring’s first half hat-trick having come the same way - and shortly afterwards Ludik’s’ score and Lyttle’s conversion took Ulster to the 40-mark.

After Zebre shipped their second yellow card of the night, Baloucoune got over before Nelson wriggled his way through to dot down with Lyttle converting both.