Preview: Cheetahs have played seven times in the northern hemisphere since August 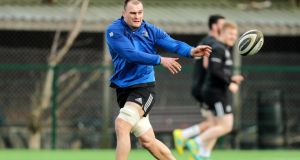 Rhys Ruddock will captain Leinster for their clash with Cheetahs following his recovery from a hamstring injury. Photograph: Laszlo Geczo/Inpho

Rhys Ruddock has recovered from his hamstring injury and will captain Leinster against Cheetahs tonight giving Irish coach Joe Schmidt additional backrow options for the visit of France on Sunday week.

Tighthead prop Andrew Porter is also a likely participant from the bench as Leinster lock on to securing Conference B with a bonus point win.

With 25 points remaining on offer, however unlikely it is to catch Leinster, who are 22 points ahead of the field, it is mathematically possible, say if they lose all their remaining games and Edinburgh win all theirs with maximum points.

Edinburgh and Leinster have one more meeting.

For Cheetahs it is another day on the road after the International Rugby Players (IRP) body highlighted “major concerns” around World Rugby’s proposed International Competition.

The first two of the IRP concerns featured multiple top-level test matches in different countries and time-zones in consecutive weeks as well as increased long-haul travel in short time frames.

So far the South African franchise has played seven times in the northern hemisphere since August. Leinster tonight will be their eighth time and Glasgow next week their ninth.

That represents four return flights from South Africa to the UK and Ireland with more to come.

Despite that the teams have crossed paths only once before in the competition in 2017, with the Cheetahs winning that encounter 38-19 in Bloemfontein.

“When we played them down there that was one of the toughest games I think I played last year,” said Rory O’Loughlin, who lines out for Leinster at outside centre.

“We got a pretty bad beating off them. Most teams struggle down there to play. It is tough with the travel and they are away for long periods especially with a Sunday game going into a Friday game it can’t be easy.

“But they do similar travel when they are in Super Rugby. It’s just where they are in the world and they don’t have domestic competition at top level so it is a challenge. It’s always going to be a challenge I suppose.”

It would be quite a feat for Cheetahs or the Kings, who in future years may have more Springbok players in their rosters, to play Pro14, The Rugby Championship and what World Rugby has proposed.

For now Adam Byrne earns his 50th cap while in the half backs Jamison Gibson-Park starts with outhalf Ross Byrne. In the pack, it’s a new front row with Peter Dooley, Bryan Byrne and Michael Bent starting.

Ross Molony again starts but is joined by Scott Fardy in the secondrow. In the back row Ruddock takes his place at blindside, with Max Deegan and Caelan Doris again completing the pack.