Connacht come unstuck at Zebre to slip further back 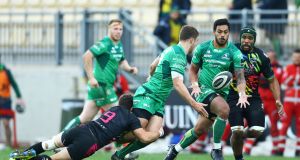 Zebre closed the gap on opponents Connacht with a 24-10 victory in their Conference A Guinness Pro14 clash in Parma.

Two penalties from Carlo Canna gave Zebre a 6-0 half-time lead, the latter coming after the Italians had seen a try ruled out by the TMO.

Connacht were back in it early in the second half when Tom Farrell made the most of a mistake in the home defence and raced over to score. Steve Crosbie landed the conversion to put Connacht side 7-6 ahead.

Another penalty from Canna put Zebre back in front but their lead did not last long as a penalty from Jack Carty — on for the injured Crosbie — made it 10-9 to Connacht.

The Italians restored their advantage with a try from Johan Meyer which was converted by Canna to give them a 16-10 lead and added a Canna drop-goal and a try from Giamba Venditti to ease to victory.