Munster set to pile the pain on struggling Ospreys 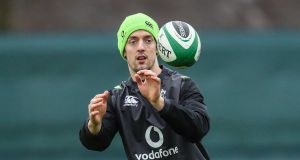 Simon Zebo slots in at fullback with Sweetnam and left wing, Alex Wootton, Munster’s top scorer with seven tries so far this season.

Billy Holland captains the side in the secondrow along side Jean Klyne.

That is offset you would think by Peter O’Mahony, C J Stander, Conor Murray, Andrew Conway and Chris Farrell not lining out for Munster.

Since the Welsh Union took control of the sides, this will be their lot every year with Wales playing an extra international fixture except in a World Cup year and hence the weakened travelling Ospreys side.

Recently they have been poor prompting James Hook to ask his team-mates to look at themselves in the mirror, more so after last weekend’s 6-47 defeat to Glasgow.

“We can talk all we like but we’ve just got to go out on the pitch and put in a performance that represents us as a team, as Ospreys,” said Hook.

“It is never easy and you’ve got to look back at the game. I know there has been some honesty calls at the team meeting, calling players out, which happened this week.”

Rebound or more pain? You’d have to go with Munster.