Van Graan’s words can only embolden O’Mahony and Stander 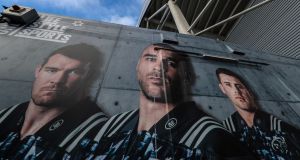 This week in Limerick Johann Van Graan spoke about his need for change, the fact that he and his wife made a decision when they were married to travel the world, embrace change and enjoy what life had to offer.

A reflective and considered man, Munster’s new coach also reasoned that the only thing guaranteed in rugby life is change, that change is not something to fear but to be respected and treated as an influence that benefits life.

“Family is the biggest part of my life. That’s the thing that matters the most to me,” he said.

“When my wife and I decided to get married we said we love travel and we want to travel the world. We decided that at some stage hopefully I’d get an opportunity to coach overseas. So that was always part of our planning.

“I believe the only certain thing in life is change,” he added. “Change is good. I needed another challenge. I’ve been assistant coach now for a very long time. I had wanted different opportunities a few years back, spread my wings. I have got big dreams but, that being said, I need to be part of something bigger than myself.”

With those few words it is not difficult to understand why Van Graan arrived from South Africa with ringing endorsements that he was a serious man as well as a serious coach. But elsewhere those same concepts were being played out in a different way by different people and for different reasons.

Two of Van Graan’s key players, the Ireland and Lions’ captain Peter O’Mahony and fellow backrow CJ Stander also hinted at spreading their wings when their contracts came to an end, a decision that would come with significant collateral damage to the Irish team.

If they move abroad, as Simon Zebo is doing, they would be throwing themselves under the Irish selection bus. No question.

O’Mahony suggested that change might not be the worst thing for his career, for his family and for his future comfort, when all the rugby is finished.

The players’ words and sentiments were not challenged or denied over the last five days that bigger offers had been made to their agents by overseas clubs.

The message was clear after a clean sweep of the November international series that if Van Graan lost O’Mahony and Stander to the IRFU’s inability to meet the market value of their two frontline Irish players, then Joe Schmidt would lose them too.

There was an irony at play. What Van Graan was promoting in his first press conference was similar to what O’Mahony and Stander were considering, planning for wellbeing and family. In the process the players were making the coach’s life more difficult in his first week on the job.

Former Irish and current Worcester Warriors lock Donncha O’Callaghan chimed in on the issue on Off The Ball.

“For me, it’s a no-brainer,” said O’Callaghan. “Peter O’Mahony playing for Munster, just boom, just make it happen. He’s the heartbeat of the place at the moment and it’s important we keep that. And on a personal note, he’s the man who drops logs down to my house since I’ve moved to England.”

O’Callaghan’s throwaway line about delivering logs to his home when he is not there possibly carried more weight than anything else said about O’Mahony during the week.

That unsolicited courtesy was a glimpse into the heart of the culture at Munster that we often hear about but as outsiders probably do not fully understand. It is easy to believe O’Callaghan plays for Worcester with a Munster mindset.

Not only is O’Mahony central to the cultural role but he is one of the players who defines what it is at Munster and sets the benchmarks for other players to follow. Stander too shows all the traits and his recent elevation to Irish captain against Fiji, when Rhys Ruddock went off, is further recognition that life in the Munster jersey is about more than 80 minutes on the pitch.

Van Graan deflected the questions about the two players in the University of Limerick, although he would have understood the other irony at work.

By O’Mahony publicising his frustration about his dealings with the IRFU and his contract and making clear the explicit threat to leave by turning down their offer, he was taking himself outside of the inclusive Munster culture because, real or not, the loyalty aspect was being threatened.

Van Graan continued to explain his motives for moving to Ireland.

That was Munster’s week, one of a new coach speaking articulately about how rugby dovetails with life, about bigger issues and how important Munster rugby is to him.

Inadvertently Van Graan was also making the strongest case for the players to follow their instincts and leave Ireland if they truly believed that was what their future held.