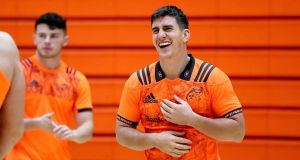 Munster have made two changes to the side that secured a bonus-point victory away to Zebre last weekend, as Ian Keatley and John Ryan return from international duty for Saturday’s Pro14 clash against Ospreys.

The game will be new head coach Johann van Graan’s first home game in charge as Munster seek a third Pro14 win in a row.

Simon Zebo starts at fullback with Darren Sweetnam and Alex Wootton, the province’s top try-scorer with seven tries so far this season, making up the back three.

Rory Scannell and Sam Arnold are in the centres as Keatley partners James Hart at halfback.

John Ryan comes in at tighthead prop to partner Liam O’Connor and Rhys Marshall in the front row.

Captain Billy Holland and Jean Kleyn are in the second row with the back row of Jack O’Donoghue, last week’s Man of the Match Chris Cloete and Robin Copeland unchanged.