Connacht to try out new halfback pairing at Zebre 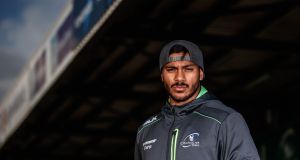 Pita Ahki: he will make his first start at outside centre for Connacht as they travel to Italy. Photograph: James Crombie/Inpho

Keane has also included new signing Pita Ahki among his starting side. Ahki, who came off the bench to make his debut against Cardiff, will make his first start at outside centre for the province as they travel to Italy.

Ahki was signed by Connacht as cover for Bundee Aki, and has shown himself to be an eye-catching player. He played for the Tongan under-20s at the 2011 IRB Junior World Championship, and for New Zealand under-20 in the 2012 tournament in South Africa.

He also represented New Zealand Sevens between 2012-2016, winning a silver medal at the 2014 Commonwealth Games in Glasgow.

“While we were disappointed not to beat Cardiff last week, I was proud of the boys and the way they battled to take two points from the game,” said Keane. “In this competition it is really important to do well against teams in our conference.”

Of course Connacht needs only to remember back a few weeks to when they famously beat Munster in Galway. Andrew Conway’s red card that day helped the home side record the win.

But it is these matches Connacht need to win, and Zebre arrive having won two matches from nine, with Connacht three from nine.

Zebre are also strengthened by the return of nine international players following their November Series, and have former Irish under-20 and Galway native Ciaran Gaffney on the bench.