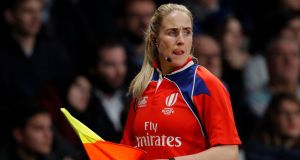 Ireland’s Joy Neville in her assistant referee role during France’s draw with Japan at the U Arena in Paris on Saturday night. Photograph: Charles Platiau/Reuters

Ireland’s Joy Neville has been named referee of the year at the World Rugby Awards in Monte Carlo.

A veteran of 70 caps for Ireland, Neville is now making history in the world of refereeing.

She took charge of the Women’s Rugby World Cup final in Belfast in August and refereed her first men’s international in Rugby Europe’s Conference 2 North in October.

This month she is acting as assistant referee for three men’s matches, having recently signed a professional contract with the IRFU.

New Zealand’s Beauden Barrett picked up the men’s player of the year award for the second successive year, while his compatriot Portia Woodman took the women’s award.

It was a successful evening for the All Blacks with their women’s 15s side winning the team of the year,

England’s Eddie Jones was named coach of the year.

American Perry Baker was named men’s 7s player of the year, Argentinian Eduardo Oderigo won the award for character and his compatriot Joaquin Tuculet clinched the try of the year prize for a score against England in June.