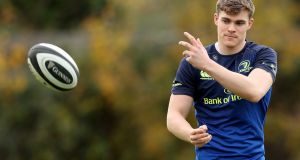 Gary Ringrose: he has not played in a competitive game since the Irish tour to Japan last summer. Photograph: Oisin Keniry/Inpho

A lively selection by Leinster, and plenty to watch here. Garry Ringrose’s anticipated return materialises following his shoulder injury and surgery. Back at outside centre partnering Noel Reid, it is the beginning of Ringrose’s journey to establish himself in the Leinster team and by the end of January impress Joe Schmidt too.

Ringrose has not played in a competitive game since the Irish tour to Japan last summer. The bulk of the Irish players are being rested before Europe next week, with Robbie Henshaw recovering from a hamstring injury picked up on Irish duty.

Leo Cullen has picked a back line with lots to offer, with Kiwi James Lowe playing his first match for the province on the left wing since moving from Super Rugby side the Chiefs. Good hands you would expect from an under-15 New Zealand basketball player.

With Dave Kearney on the right and Jordan Larmour at fullback, this is one of the most exciting go-forward back lines seen for some time at Leinster.

Scrumhalf Luke McGrath captains the side, with Ross Byrne at outhalf. Up front there’s an international back row, with Josh van der Flier, Jordi Murphy and Jack Conan at number 8. It is van der Flier’s first match back since he injured his ankle against Glasgow in October.

Similarly, the front row has three Irish players in Jack McGrath, James Treacy and Andrew Porter, all of them playing for better pecking order positions at provincial and international level.

Benetton make two changes to the side that ran Ulster close last week, more to do with Ulster fluffing their lines at vital moments than a resurgent Italian performance.

Currently Leinster sit second on the table behind Scarlets in B conference.