Johnny Sexton to be fit for opening Six Nations match 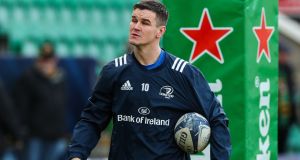 Johnny Sexton is expected to be fit for Ireland’s opening Six Nations game against Scotland at the Aviva Stadium on February 1st. The Leinster outhalf and captain suffered a medial ligament tear in his right knee in the province’s Heineken Champions Cup win in Northampton last Saturday and the prognosis is for a six-to-eight week recovery period, meaning he should be fit for Andy Farrell’s first game as head coach.

Barring setbacks, The Irish Times understands the most conservative estimate is that Sexton will require an eight-week period of recovery, which would mean him not playing again until the Scottish game. However, Sexton has proven on several occasions in the past that he is capable of returning to the test arena after a lengthy lay-off, most notably when rested for 12 weeks at the behest of a French doctor during his time with Racing in the 2014-15 season.

Sexton thus missed Ireland’s opening Six Nations win away to Wales but after 12 weeks away he kicked five penalties in Ireland’s subsequent 18-11 win over France at the Aviva Stadium a week later and went on to play a pivotal role in the remaining three rounds as Ireland won outright back-to-back titles for the first time since the 1940s.

Conceivably, as has been the case with several other Leinster players who have suffered the same injury, Sexton could recover fully and be fit to play again in five weeks or, at any rate, after six weeks.

This would potentially make him available for either Leinster’s penultimate Heineken Champions Cup pool game at home to Lyon or away to Benetton a week later. Then again, Leinster have performed so strongly to date that were they to beat Northampton at the Aviva Stadium in their marquee Christmas fixture this coming Saturday (kick-off 5.15pm) then come January it may be decided not to risk Sexton.

Either way the Leinster medical staff and the specialist whom Sexton has visited are understood to be optimistic about these time scales and, therefore, that Sexton will be fully recovered from his knee injury and fit to face the Scots on February 1st.

In the interim, Leinster will definitely be without him for Saturday’s return meeting with Northampton and the province’s trio of festive interprovincial derbies against Ulster at the RDS on Friday, December 20th, Munster at Thomond Park on Saturday, December 28th and Connacht at the RDS, on Saturday, January 4th.

Whether Sexton plays against either Lyon or Benetton, or is kept back for the Scottish game, remains to be seen but as it is, and has so often been the case in latter years, Ross Byrne will assume the number ‘10’ role against Northampton next Saturday as well as one or two of the derbies.

The 24-year-old former Irish Under-20 outhalf has built up a wealth of experience already since making his first start in the Heineken Champions Cup, also against Northampton at the Aviva Stadium three years ago, when Leinster won 60-13.

Among his 80 caps for the province, not only are Leinster seven wins from seven in Byrne’s seven European starts, but they are unbeaten (with 19 wins and one draw) in his 20 Champions Cup outings overall.

Along the way, he started both pool wins over Montpellier two seasons ago when Leinster went on to reclaim the trophy and last seasons’ concluding pool wins over Toulouse and Wasps as well as the quarter-final against Ulster.

Nonetheless, Leo Cullen and the Leinster think tank are sure to give some game time to the 22-year-old Ciaran Frawley and Byrne’s 20-year-old younger brother Harry over the next few games as well, given both have still to make their European debuts.

As for the Six Nations and that opening game at home to Scotland, presuming Sexton lines up at ‘10’, as things stand Byrne looks best placed to be on the bench ahead of Jack Carty, Joey Carbery and JJ Hanrahan or, were Sexton to have any setbacks, start instead of the latter, not least as Byrne is set to have another run of starts in that Leinster machine.

1 Owen Doyle: Creeping professionalism of schools rugby a threat to the game
2 GAA officials and referees brace themselves as new rules kick in, and this time it's for real
3 Coco Gauff pulls off biggest shock yet by beating Naomi Osaka
4 Niall Quinn happy to step into the breach at FAI
5 Scotland’s Finn Russell missed training after Sunday drinking session
Real news has value SUBSCRIBE