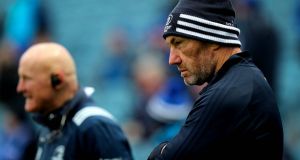 Robin McBryde: “I was ready for a new challenge. I’ve had great times but I needed something fresh as well.” Photograph: Ryan Byrne/Inpho

Robin McBryde once held the title of ‘Wales Strongest Man’ (1992) and is currently the Grand Sword Bearer of the Gorsedd of British and Irish bards, two conversational points that came to light, not at his behest, during his first media interview since taking over as Leinster scrum coach. The 49-year-old also possesses a good sense of humour.

Having described the background to the honour of winning his national strongman title for sundry disciplines like “pulling tractors, filling a trailer with bags of feed, running an obstacle course, climbing up a rope, tug-o-war, arm wrestle, that kind of thing,” he smiled that “it has been quite a burden on me to be honest.

“I’ve disappointed many a room when they hear ‘Wales’ strongest man, and then I walk in [to murmurs of] ‘that’s not Wales’ strongest man,’ because you had Gary Taylor around the same time and he was the strong man obviously. The nature of it was completely different, not just standing lifting weights.”

The former Wales international hooker (37 caps) had been part of the Welsh national coaching team since 2006 but accepted an invitation from Leinster to join their set-up.

There’s a bit of pressure, but I’m here to perform as well. I’m conscious of that; I can’t be in the background all the time

“I was ready for a new challenge. I’ve had great times but I needed something fresh as well. When the initial contract was made, I was flattered to be honest with you, and it was a no-brainer then,” he said.

McBryde appreciated the fact that Leo Cullen and Stuart Lancaster encouraged him to take time to bed-in, find his feet, to focus on the scrum initially and then build on from that initial focal point.

“There are one or two things I’ve done in the lineout, technically, but you’ve got experienced players who have been there and done it, been around the block. I think you learn as much from them as, hopefully, they can learn from me.

“There’s a bit of pressure, but I’m here to perform as well. I’m conscious of that; I can’t be in the background all the time. I’ve to step into the breach and take some responsibility and ownership. I’m just introducing them to different ways of thinking, different ways of coaching.

“That’s what’s good about the nature of the coaching group with Stuart [Lancaster] and Felipe [Contepomi] coming from different backgrounds. Leo [Cullen] has the biggest role because everyone sees him as the figurehead of Leinster Rugby and rightly so. As a player, he’s come through the ranks to coach.

“So to have him and to be able to relate to him from a player’s and supporter’s point of view and make sure we don’t deviate too far away from what’s gone on in the past. That’s vital really. Look at the history and how successful Leinster have been both in the Pro14 and in Europe. It’s not a one-off; it’s consistently up there competing for trophies at the end of the season.

“So when I come in it’s a two-way process, coaching. I’ll talk to players and they’ll come with their own views and out of those discussions we’ll decide on a plan to go forward.”

Johnny Sexton’s knee injury means he’ll miss the game at the Aviva but McBryde pointed to the manner in which Ross Byrne has run the team when he’s been handed the opportunity.

“He’s [Byrne] stepped up to the mark time and time again. I don’t envisage there being anything different on the weekend.”

The Leinster coaches and players spoke about being mentally and physically attuned come Saturday, using the example of 2013 when the Irish province hammered the Saints at Franklin’s Gardens only to lose 18-9 to the same opponents the following weekend at the Aviva Stadium.

There were also some aspects of the performance, particularly in the first half last weekend, on which Leinster can improve.

“We were pleased with the second-half performance. I think in the first half, there was a few things that we could have done a little bit better, giving them a few too many opportunities to build on some of our errors.

“So the message for the second half from Stuart [Lancaster] was that it really wasn’t good enough. We needed to change a couple of things which we were able to do. Obviously we were more than happy with the win but we do know that we need to improve.