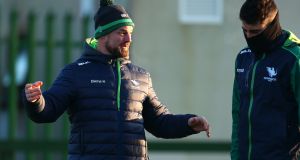 Connacht backs coach Nigel Carolan and Tiernan O’Halloran during training ahead of the Pro14 clash with Munster. Photo: Tom O’Hanlon/Inpho

Tiernan O’Halloran will make his first appearance for Connacht since October when he returns to the starting lineup to face Munster on Saturday.

O’Halloran fractured his fibula and required surgery after Connacht’s win over Dragons two months ago but he returns to the side which will be captained by Quinn Roux on his 100th appearance for the province.

O’Halloran will start at fullback with John Porch and Kyle Godwin on the wings.

In the Connacht midfield, Tom Daly has forced his way into the starting team alongside Bundee Aki. While Conor Fitzgerald continues his half back partnership with Caolin Blade, who has now featured in all 11 of Connacht’s games so far this season.

In the forwards, the tight five has a very familiar look; props Denis Buckley and Finlay are included in the starting team as is hooker Dave Heffernan. While Ultan Dillane will line up alongside Roux in the second row.

In the back row Eoghan Masterson and Paul Boyle are named at blindside and openside respectively with Eoin McKeon at number 8. Captain Jarrad Butler has been ruled out due to illness.

For Munster, Johann van Graan has made 10 changes to the team that lost to Saracens in the Champions Cup last weekend with a number of academy players coming in.

Craig Casey makes his first Pro15 start at scrumhalf having previously featured twice off the bench and Dave Kilcoyne returns from injury to start in the front row.

Academy winger Liam Coombes makes his fourth appearance and starts alongside cousin Gavin Coombes for the first time in the Pro14.

CJ Stander retains his place and the captaincy with Chris Farrell, JJ Hanrahan, Jean Kleyn and Billy Holland also keeping their places in the starting XV.

Shane Daly is named at fullback with Calvin Nash and Liam Coombes on either flank.

Dan Goggin and Farrell pair up in the centres with Casey and Hanrahan in the halfbacks.

Kilcoyne, Kevin O’Byrne and Stephen Archer start in the front row with the secondrow partnership of Kleyn and Holland unchanged.

Gavin Coombes, Chris Cloete and Stander complete the side.