Billy Burns looking forward to a new challenge with Ulster 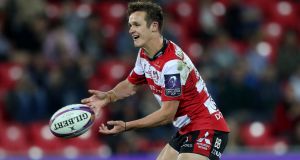 Billy Burns: “I wouldn’t have come over here if I didn’t think it was a club going in the right direction, a club that has ambition that suits mine.” Photograph: Billy Stickland/Inpho

There were pre-season gifts for Munster and Ulster with the arrival of shiny new number 10s.

The sky’s the limit for Joey Carbery in Limerick – that’s established – whereas in Belfast plenty of unknowns remain.

Billy Burns was added to the list of outhalves to crop up in conversation about the rudderless province (no chief executive nor head coach on site) over these past 12 months.

Paddy Jackson is in Perpignan now; the stop-gap Christian Leali’ifano returned to Australia; Stephen Donald was the All Black signing that never was; Carbery rejected Belfast for Limerick; and Danny Cipriani replaced Burns at Gloucester. (Yesterday Cipriani received a €2,235 fine after pleading guilty for common assault, resisting arrest and bruising a female police officer during an incident outside a nightclub in Jersey).

Don’t forget Johnny McPhillips, even David Humphreys got a mention.

Burns, the 24-year-old younger brother of England international Freddie, qualifies for Ireland – seemingly an IRFU precondition before green-lighting his two-year deal with Ulster – via his Cork grandfather, Patrick.

In 29 matches last season for Humphreys’s Gloucester, Burns registered 70 points, Billy Twelvetrees being the primary kicker with 184. So slotting goals will be the first order of business for the England U-20 World Cup winner (Maro Itoje’s 2014 team beat a Ross Byrne-guided Irish side in the semi-final).

“I wouldn’t have come over here if I didn’t think it was a club going in the right direction, a club that has ambition that suits mine,” said Burns at the Eir sport media day.

Worryingly similar to the beginning of Les Kiss’s time at Ulster, the province is operating without their new head coach Dan McFarland until January as the Scottish Rugby Union demand compensation to release their head-hunted forwards coach in a World Cup season.

Simon Easterby, ironically the Ireland forwards coach, is running the show at Kingspan Stadium until the former Connacht assistant coach shows up.

“It’s not been ideal with Dan not coming in but we’ve had Simon in, he’s been good for us, and Jared [Payne] has been awesome as well,”

Burns added. “It’s not a massive issue, it would be great to get him in as soon as possible but I think we’re looking at January if not a bit sooner. As players we can only focus on getting better. Dwayne Peel and Jared have got everything under control in terms of the training we’re doing and the plans they’re putting in place.”

There’s a more settled look down Munster way as Johann van Graan completes a full preseason with Carbery primed to run the team (Tyler Bleyendaal is still listed absent due to his neck problems).

“I’d have trained with him a lot with Ireland,” said Rory Scannell. “He’s exciting, he has that X-factor as we’ve all seen many times.”

“[Botha’s] an absolute monster of a man, he’s been unlucky with injuries,” Scannell continued. “He had a very good season with London Irish when he went there last year, with the internationals not coming back for a few weeks, hopefully he can get a run of games under his belt before they get back. He’s played with the Springboks, he’s played at a very high level. It will be exciting to see how he fits in now.”

“[Haley’s] very exciting, just watching him in training. He has experience too, more than 100 games for Sale and he’s only young. With Zeebs leaving, there was a lot of talk about that, I don’t think people really know how good Mike is.”

1 Bryson DeChambeau trainer insists muscle gain is not down to steroids
2 Paul Stirling’s heart over head decision to play on for Ireland bears fruit
3 Sporting Cathedrals: Le Stadium - European fortress of the mighty Toulouse
4 Leo Cullen says rotation will be key as Leinster look to keep on winning
5 Rory McIlroy hoping course-and-distance form will stand to him at Harding Park
Real news has value SUBSCRIBE