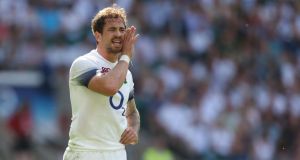 England outhalf Danny Cipriani has been arrested and charged by police for assaulting a police officer at a nightclub in Jersey, his club Gloucester Rugby said on Wednesday.

The club confirmed the incident happened in the early hours of Wednesday morning.

“This afternoon, 30-year-old Daniel Cipriani was charged with common assault, larceny, assault on police, resisting arrest and being disorderly on licensed premises,” Jersey Police said in a statement.

“He has been remanded in custody until his court appearance at the Magistrates Court at 10am tomorrow.”

Cipriani joined Gloucester at the end of last season from rivals Wasps and had completed a training session on Tuesday.

Cipriani won his 16th England cap in the third test against South Africa in June, his first start for the national team since 2008.

He has been warned by England coach Eddie Jones about his conduct, following a number of off-field issues during his career, including a training-ground fight with a Wasps team-mate and a nightclub incident while playing for Australia’s Melbourne Rebels in 2011. Cipriani was also hit by a bus on a night out with Sale team-mates in 2013.

Gloucester said they will make a further announcement in due course. – Reuters