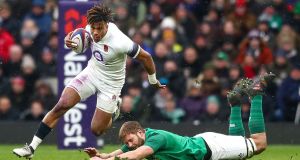 England have been dealt a double injury setback before the new season with Anthony Watson a serious doubt for the start of next year’s Six Nations and Jonathan Joseph ruled out of November’s autumn internationals.

Watson was forced to undergo surgery on his torn achilles for the second time last month after the first operation effectively failed. The initial prognosis was six months, suggesting five more months on the sidelines, but there are some fears at Bath that Watson could be out until the latter stages of the season.

“The initial surgery didn’t take basically, [HE NEEDED]another tear to have surgery again. He’s had to start afresh and it was done about a month ago,” said the Bath director of rugby, Todd Blackadder. “It is a start-again injury, so we honestly don’t know what the timeline is.”

Joseph underwent surgery on an ankle injury in April and while it was initially thought he would be sidelined for six months, Blackadder explained the player is expected to return “around Christmas time” ensuring he too is set to miss England’s autumn campaign against South Africa, New Zealand, Japan and Australia.

Both absences are a blow to Eddie Jones – between them they have scored 32 England tries in 73 appearances and they were both missed during the series defeat by South Africa – and the coach’s stated aim of four wins this autumn.

Watson suffered his injury in the Six Nations defeat by Ireland in March while Joseph picked up his on club duty against Saracens but it was the long-term injury suffered by Beno Obano at an England training camp in May that sparked a public spat between Jones and Bath’s Bruce Craig.

Jones has since apologised for calling Craig “the Donald Trump of rugby” after the Bath owner lashed out over the number of his players to suffer injuries while with England. The row was top of the agenda at June’s Professional Board Game meeting but Blackadder has since spoken to the England coach and hopes the situation will improve this season.

“I hope common sense will prevail,” he said. “There will be lessons learned on both sides on how we get the best out of all our players – because that’s what we all want to do, we don’t want to have a relationship where we are pulling the player between the two. It just doesn’t work.

“Hopefully common sense will prevail and we send players there [ENGLAND]in the best possible nick they can be and we just hope that is reciprocated. Hopefully both campaigns get the best out of our players.”